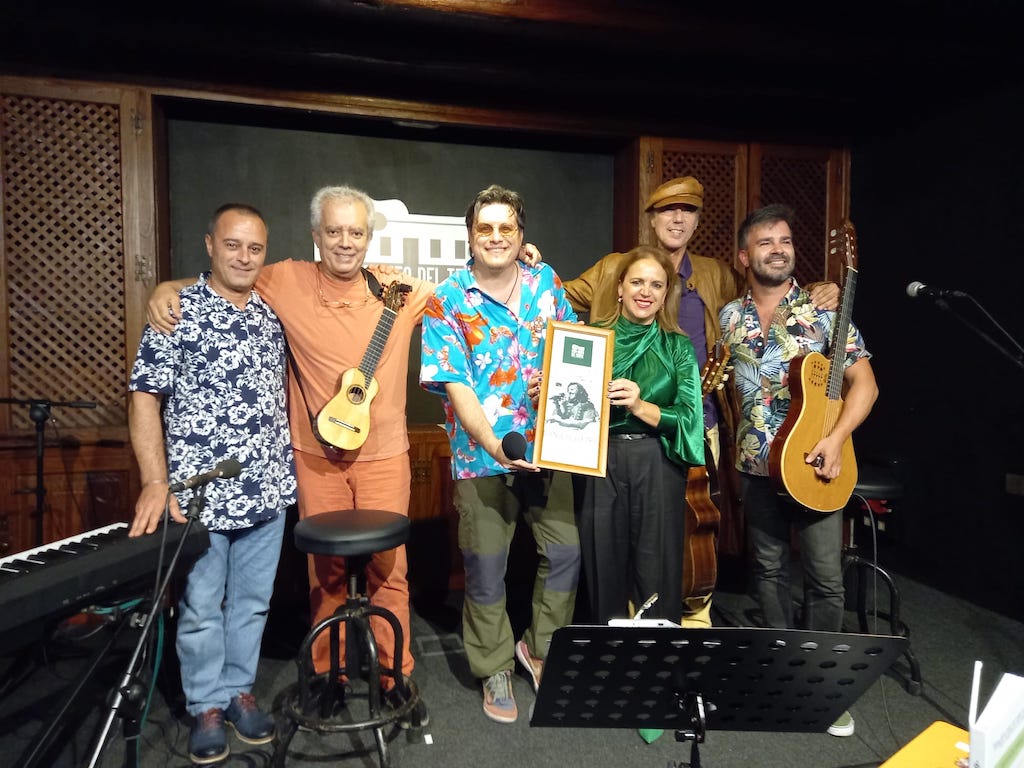 There so many concerts taking place on this small island that it difficult keep track of all that is going on. Pre-concert publicity is variable and, especially for those of us who can´t seem to learn Spanish, to be sometimes virtually non-existant which means that many of these concerts might pass us by. However we have learned to trust the venues that put on these events, and we have never been disappointed by any act at The Timple Museum, or at any other venue on Lanzarote for that matter. In fact I am always concerned that you might think I am just talking hyperbolics in my reviews. Honestly, though, a recent poetry and music event at The Timple Museum was absolutely top-notch.

On Friday 1st July we turned up at the concert, having bought tickets for this event that seemed to have been given very little promotion so we had no idea what to expect. However, safe in the knowledge that we have seen so many wonderful concerts in this incredible museum of timple music we had decided to give it a go. And what a wise that decision that turned out to be.

The lights dropped and our favourite master of ceremonies stepped on stage to make the introductions. He only speaks Spanish and although we can´t understand a word of it we are absolutely certain that he is always respectful about the acts he introduces and indeed pays the courtesy to the audience of providing all that relevant information.

And then came the force of nature that is Duende Josele. From the rear of the theatre we could hear a rhythmic vocal deliver, half sung have orated and it grew louder as he walked down the aisle, between the rows of seats. There was percussion, too, it sound like but as he walked past our row we realised it was him beating his chest as he spoke. He reached the stage and concluded his recitation to complete surely one of the most dramatic entrances this Musem del Timple had ever seen.

The concert had been advertised to be taking place in the courtyard but instead, perhaps to accommodate fuller audience than expected, we were all show inot the theatre indoors

Duende Josele presented this Friday his latest album “Versos con Lengua” at the Casa-Museo del Timple in Teguise.  The singer and poet from Extremadura was accompanied by two great professionals, the pianist Alberto Terrón and the guitarist Alfonso Seijo. The, were the perfect accompaniment, being excellent players who nevertheless played only to complement the central performer. They were perfectly in synch with each other throughout as a perfect platform for Duende´s material. He actually sand a lot of his poetry, but would drop to the spoken word when appropriate.

He had a natural relationship with his audience, and obviously carried a great deal of respect for the musicians.

The album consists of 12 compositions and has the collaboration of singers of the highest reputation  such as the Argentine Sofía Viola, Ismael Serrano, Pablo Guerrero, Zenet, Capitán Cobarde or El Canijo de Jerez among others.

Josele conquered the public that filled the capacity of the House-Museum. His show was developed for two hours with his songs intertwined with poetry that became a one-on-one between the audience and singer. Duende Josele in his visits to Lanzarote has earned the friendship and affection of musician friends such as Toñín Corujo and Manuel Gopar.

“Versos con Lengua”, is a work that has emerged over the last two years taking advantage of the break of the pandemic and addressing themes and sounds already common in his music such as swing, tango, cumbia and reggae. The show ended with a staging with very festive airs also with the participation of Toñin Corujo, Manuel Gopar with the audience clapping.

The Councilor for Culture of the city of Teguise Nori Machín present at the event, gave the singer the framed poster commemorating the concert, a quaint idea that never saw in the UK. It is, though, patently obvious how much the artists appreciate the sentiment.

As some of you might know I worked in a poetry music duo, called Lendanear, back in the UK recording four albums in a ten year caeer. I don´t remember any venues giving us a plaque to commemorate our performance. We were give a P45 once or twice, though.

With sometimes as many as four great musicians on the stage the music delivered tonight was brilliantly but tenderly played. No showmanship, no one-upmanship. Duende, like Jools Holland, conducted all this almost invisibly. He seemed to be a character comfortable working amongst this musical excellence, sure in the knowledge that his writing and performing fit in perfectly.

We had a quick chat with him at the end, buying a copy of what he said is his sixth album, and one his beautifully-designed books of poetry.

We left him one of our Lanzarote Information cards and he promised to get in touch to arrange an interview. So watch this space.

Meanwhile on the way home, in saying how much she had enjoyed the event, my wife Dee likened him to Elvis Presley whereas I though he had reminded me of Buddy Holly. How strange that such rock and roll names should be invoked by a Spanish poet and acoustic instruments. But I guess that, like Elvis, he showed he could lead an orchestra, and of course, Elvis would often deliver a spoken verse within a song, and in that closing ´jam session´ tonight Duende had whipped his musicians along in exactly the way Buddy used to drive the Crickets-

Without a review put out over the weekend by Voz we wouldn´t have had the names of all the players and other supporting information, and yet this had been as good as any concert we had ever seen. And the acoustics of Jameos Del Agua could prove perfect for when he comes back to Lanzarote.