Food In The Future 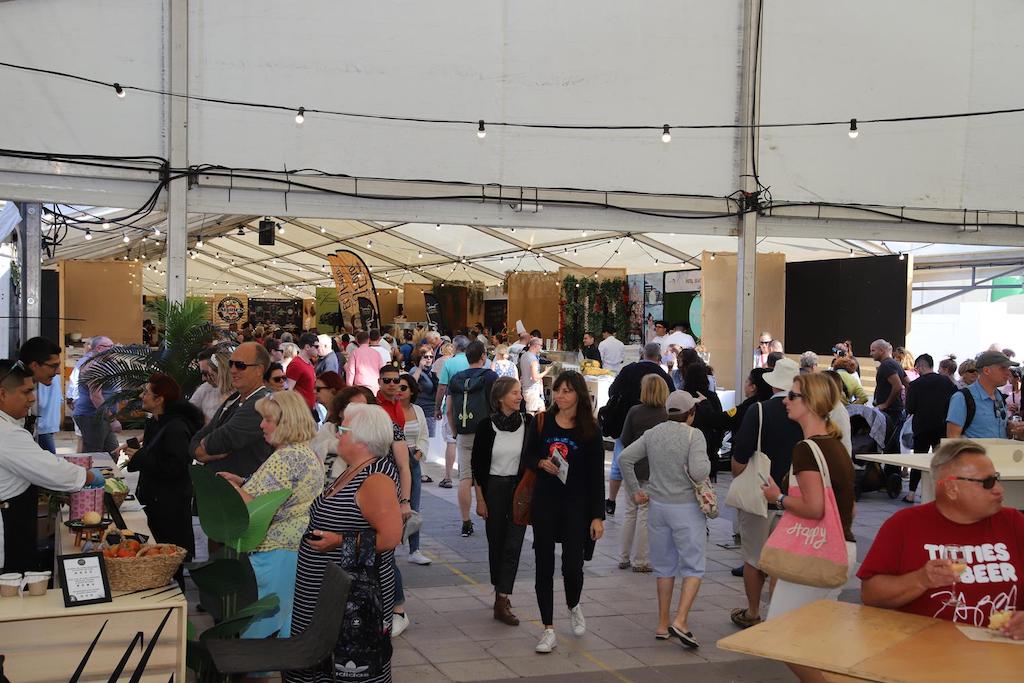 ´We were gutted to miss the Gastro Fair at Teguise at the weekend, but we bailed out as we didn’t want to spread our germs. It did make me reflect on gastronomy on the island and how far it has come in the years we’ve lived here. When we first arrived, the food on offer was pretty basic. Most restaurants had what they called an “international menu,” which translated as two types of steak, a Stroganoff and chicken dish of some sort, generally served with a  mixture of chips, rice and frozen veg. There was also only one curry place on the island – Steve’s Balti House – anyone else remember that place? But these days, we have some really world class food on offer, with confident young chefs using amazing local produce from the ocean and the land here. We love it!´

Miguel recently posted the piece above in his newsletter and What’s On Lanzarote web site, so I thought the least I could do was try to bring him up to speed with what he missed.

Perhaps none of Lanzarote’s annual festivals are as greatly anticipated as the Enogastronomy Saborea Lanzarote which was held recently in Teguise.

Nevertheless, readers might think it a strange inclusion here on our all across the page which normally does what it says on the tin, and covers the arts. There may be many readers who wonder what food and art could possibly have in common that might bring them here to the same page. Well, we can tell you that in some of the woks and pans the food that was being fried created throws of Jackson Pollock abstracts as various foodstuffs ran into one another and the hiss and sizzle and bubble and squeak of ingredients being grilled, boiled or fried and stirred sounded like a symphony orchestra. You could feel the soft textures of some fruits and the hard-nut shells of others and the aromas were so full and lingering that they remain on my notebook pages even as I type up this report several days later. And, of course, we were allowed to taste the delicious results: spicy, tangy, fruity, creamy, but always delicious.

The Annual Festival Enogastronomy Saborea Lanzarote (Gastronomical Flavours of Lanzarote) closed its ninth edition recently in La Villa de Teguise having enjoyed a resounding success. Thousands of people visited the event throughout the course of the festival, tasting the different tapas prepared by the more than 100 exhibitors.

María Dolores Corujo, The President of the Island Cabildo, wanted to “thank all the attendees for their participation in this annual staging of this festival, which has again been a success and consolidated its position as the largest wine-making event in the Canary Islands´. She also thanked ´all exhibitors, sponsors and collaborators for their involvement and participation, since without them none of this would be possible´.

For his part, the Director of Tourism, Economic Promotion, Agriculture, Livestock and Fisheries, Angel Vázquez, was very pleased with ´the massive attendance at the festival, as this has shown that it is the best showcase for the magnificent food products that we have in Lanzarote. Thousands of Lanzaroteños and visitors have not only tasted the delicious culinary creations, but have been able to know, first hand, the enormous effort that all producers in the primary sector make every day.´

We also heard, as we wandered the Sidetracks And Detours between cake sculptures that truly were works of art, that there would soon be announced ´a press conference, where the data of the economics of the event was to be released to assess the impact and return of this very important festival.´

The Mayor of Teguise, Oswaldo Betancort, offered assurances that ´Teguise will continue to bet firmly on this unique initiative in our Archipelago´, and highlighted ´the suitability of the historic setting of Teguise, the island’s former capital, to hold an event that boosts the consumption of island products, which moves and promotes local trade and employment, the gastronomy industry of Lanzarote and the Canary Islands, and which also elevates us internationally as a tourist-gastronomic destination´.

There were show-cookings, tastings and master classes held throughout the Festival

The Aula Saborea Lanzarote was the epi-centre of the best show-cookings, in the hands of great restaurants and chefs of the island, who put the focus on the magnificent local product.

For their part, the Espacio Saborea España and the Canary Islands hosted, in the same tent, the tastings of different restaurants of Galicia and Denia, as well as all the islands of the Archipelago.

The Gusto Classroom hosted master-classes from some of the most renowned chefs in Spain and Portugal.

The Middle Atlantic Cuisine, apart from by these speakers, was represented in a space of its own, where you could taste the delicious creations of chefs both from the invited city, Lisbon, and Lanzarote itself.

In the Casa del Producto Canaria the attendees were able to learn a little more about the origin and the delicious nuances of two iconic products of the Archipelago: cheese and wine. To do this, they had enjoyed the presence of master queseros and representatives of the wineries of the D.O. Vinos de Lanzarote. The latter were also present in the Wine Classroom, where the participants of the workshops enjoyed exquisite pairings with various references of the island.

For its part, the Sea Classroom hosted another year of a delicious selection of seafood from the Island by Pescatrón, sponsor of this space. The most curious of the crowds also came on the Saturday to see the spectacle that the Torres Brothers performed with the ´snoring´ of the tuna. On Sunday, this fish was auctioned, by The Rotary Club Of Costa Teguise, which dedicated the benefits to the construction of a playground in the Hospital de Lanzarote.

Talking of a playground reminds me that young people took an important part of the Enogastronomy Saborea Lanzarote Festival. In the Aula Chinijo Chef they had great fun discovering the flavours, colours and textures of different local products, when tasting delicious recipes by Víctor Gonzalo and Sofía Jiménez, contestants of MasterChef.

Youngsters were also delighted with the Gastroludoteca, where they cooked and played while their parents attended the different workshops of the festival.

The Gastronomic Reef Area, making its debut at the Festival, was also a success. Attendees were able to enjoy the best gastronomic proposals of restaurants in the capital, to the rhythm of Parranda El Golpito and DJ Maxi Ferrer.

Finally, the Gastromarket enjoyed tremendous foot-flow. Thousands of people tasted each and every one of the dishes of the more than 100 exhibitors, who created from local product for locals and visitors alike.

The event concluded in the Plaza de los Leones de La Villa de Teguise with a concert on the Sunday evening.

Since then, the promise to reveal data drawn from the Saborea Lanzarote Festival has been delivered, and will be the starting point of an important initiative, with Lanzarote,  that will generate positive impact on both environmental and social issues. Lanzarote is to lead a European project for the development and positioning of Macaronesia as a gastronomic destination in those territories that participated in the Festival.

Indeed, since the conclusion of the Festival, representatives of Senegal, Mauritania, Azores, Madeira and La Palma, who all attended the weekend at the Enogastronomy Saborea Lanzarote Festival, have held a meeting with the President of the Cabildo, M. Dolores Corujo and the Director of Tourism and Economic Promotion, Angel Vázquez.

The director has emphasised that ´the enriching experience of the Enogastronomy Saborea Lanzarote Festival, recently celebrated for the ninth consecutive year, will be the starting point of this ambitious project, which will not only generate positive impacts on the participating territories, both economically, environmentally and socially, but will also recover and promote the cultural and gastronomic ties of the Atlantic MAC space.´

So, the festival obviously provided much food for thought and could change the way cuisine is employed in the future in a mutually beneficial way with the tourist industry. I reckon those of us who live here might benefit from that, too, so save me a place at the table, please.