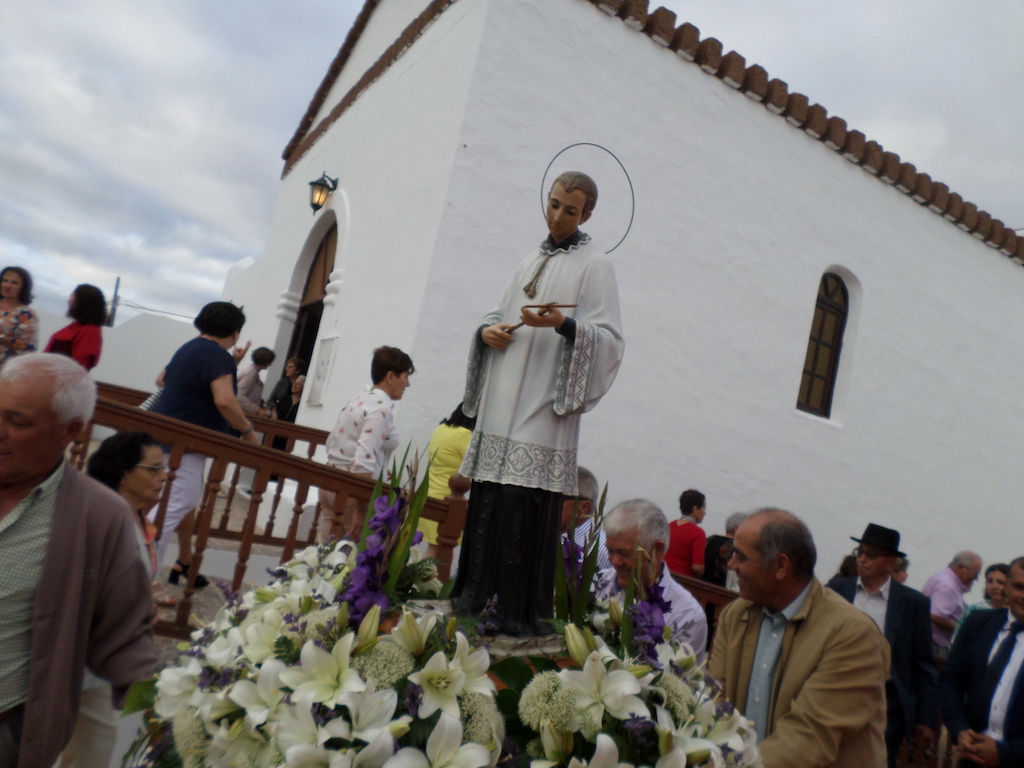 I often sit in my folding chair, which is green and white and rusty, out near Faro Pechiguera, pointed to ‘where the red sun kisses the sea,’ (thank you Lindsay Buckingham and Christine McVie) throwing sun-down shadow on the horizons of Fuerteventura.

I also often ‘set up my office’ at various points between there and Marina Rubicon at the other side of Playa Blanca. Sometimes I settle above the harbour where I can easily count the ‘sixteen on the water’, the bright wooden rowing boats with names like Pretty Katarina, Princess Maria and Santa Soo, bobbing on the waves as if to guide in the ferries.

The contraption that is my chair seems to attract strange visitors. Seriously, I have been engaged in conversations with a woman claiming to be a Russian spy, and with an octogenarian islander, a fisherman, discussing Lanzarote before the tourists started coming here

I once took my trusty, rusty fold-up back-stage at a music festival held in the square outside the lovely church in Playa Blanca where a middle aged couple, similarly solipsistic, were throwing jive moves to the jazz fusion music played by a band being watched by hundreds at the stage front.

In the early evening, above the timeless Salinas de Janubio and on La Geria, looking out on a deserted landscape, rolling to the edge of time, my chair and I enjoy perfect solitude and there is nothing quite like the stillness of sitting under the stars in the town square at Yaiza.

I often place my chair at Los Hervideros, on the lookout for the occasional silver-spumed waves that explode from the cave in the sea, and I once relaxed on my chair inside the artisan’s hut besides Manrique’s house in Haria, where a confused two language discussion was held between my wife and the old man who still weaves baskets there today.

The chair and its occupant were most recently seen at a few arts and cultural events last week. As your correspondent for such events I had promised to deliver a review of the last in the current series of Conciertos Clasicos, the wonderful free concerts I have reported on in recent postings. This concert, to be performed by musician Kosu Okinena and baritono Krzysztof Biernacki was one we had been particularly looking forward to as vocal and piano was a combination we had not yet seen, with most of the previous performances having been delivered by choral groups or string sections.

I drove to Arrecife with some nonchalance, secure in the knowledge that we knew where the venue was and where to park. However, because of an example of the almost organised chaos that sometimes takes over events on Lanzarote, we never got to the venue, and never saw the concert. This was because a huge, free pop / rock / world music fiesta was being held on the beach in the town centre. It seemed that all roads were closed leading to and from the venue of the concert we wanted to see, and there were already hundreds of young, and very well behaved, people heading for the beach party. As we tried to close in on the town centre, we found ourselves drifting further out towards San Bartolome, and in the end decided that as we probably would not have been able to hear our classical music for the over-amplifed sounds from the beach stadium, we would give it up as bad job and head back for a meal at Mamma Rosa, our favourite sea front restaurant in Playa Blanca.

There was a little bit of similar confusion a couple of nights later. My wife holds lengthy conversations in Spanglish with her Spanish friends in her yoga group, and just sometimes gets hold the wrong end of the stick. So she told me some of her yoga friends in Coro de Yaiza were singing at a Festival in Las Brenas, a town just up the hill from us. So off we set, with my chair, as we didn’t really know whether or not this was to be an indoor event. It was.

It turned out the ladies were supporting the Mass as a choir during the service for San Luis, and so I was reviewing not a recital but a religious service. What a lovely event it turned out to be though, even for a non-believer like myself.  The choir sounded wonderful and the entire service reflected so much the Spanish attitude of the mutual respect between all generations of family members. There were beautifully delivered readings by two young girls with a couple of more elderly female members of the community also delivering homilies.

At the end of the service the statue of San Luis, being the patron saint of the town, was carried and escorted by throngs of people, on a circuit around the edges of Las Brenas. This procession was led by a reverential, but free-form, New Orleans style jazz band, playing that stilted cemi joyful and cemi funereal music we all know. I’d really love to understand better how that form of music has been incorporated into these processions, but for now I was struck more by the magnificent and somehow symbolic panorama as I looked down from the steps of the church, all the way to the sea. It was just turning dark, and a huge and dense black cloud hung over the proceedings, but on the sea’s horizon, where the sky meets the end of the world, the sun sank lower from behind that cloud and threw glorious hues for miles around. Almost simultaneously the procession arrived back at the church and the statue was returned inside. A folk lore band instantly began playing traditional Lanzarote music. It might not have been quite what we were expecting, but this had been a marvellous occasion.

Each town on the island has its own patron saints in this way, and there are, therefore, similar events across Lanzarote throughout the year.

Two days later was World Yoga Day and Dee, my wife, wanted to attend some special classes that had been arranged in Teguise Teatro, some of which were being delivered by Daniela Scimonelli, her yoga teacher. As Dee headed off to the sessions I spent a couple of hours looking round the town centre I most love on Lanzarote.

The doors and the architecture helped make the almost deserted streets of an old fashioned square look beautiful,… historic and regal, and I enjoyed the rest of my Saturday afternoon in somnambulant fashion, sitting in my fold up chair, reading my paper.

We drove back to Playa Blaca in time to get down to the beach for the night’s celebrations of San Juan, a Festival that celebrates the life of John The Baptist. Hundreds of people were down there to enjoy the rock sounds of a live band on stage, who closed their set brilliantly with Smoke On The Water, which perfectly anticipated the lighting of what must have been about a thousand Chinese Lanterns, released over the sea towards Fuertaventura.

The conservational and ecological debate surrounding this practice will, I think, grow louder in the next couple of years, but for now there was no denying the incredible spectacle we saw through smoke and shadow, as these lights crossed the skies and seas like galleons off to explore the universe.

All these were waved away from the shore by families of grandparents, parents and children who had queued in their hundreds in the patient manner for which we British were once much admired around the world. Whilst Dee wandered around to soak up the full atmosphere I mused on what a vibrant island this is, and watched this amazing sight from my folded chair on the beach.

The chair and I can even be seen on weekly basis on the car park of Lidl in Puerto Del Carmen, where I point it in the direction of the mountain tops in the centre of the island.

I am a sixty five year old Englishman, a resident for two years, flat capped over an attire of t-shirt and shorts, and my green and white striped, rusty folding chair, is my constant companion on the island. And it is here, or anywhere else I unfold this chair, that I consider to be the work-space at which I, mentally, pen most of my reviews for Lanzarote Information.

My favourite site, though, is the one behind the rusted link chain at the edge of the pedestrian walkway near the town beach entrance in Playa Blanca. From there,  I can see it all …..and by the way, I’ve heard that the chair has, amazingly, become the title subject of a poem by writer Jim Loughrill, a member of Lanzarote Creative Writing Group.