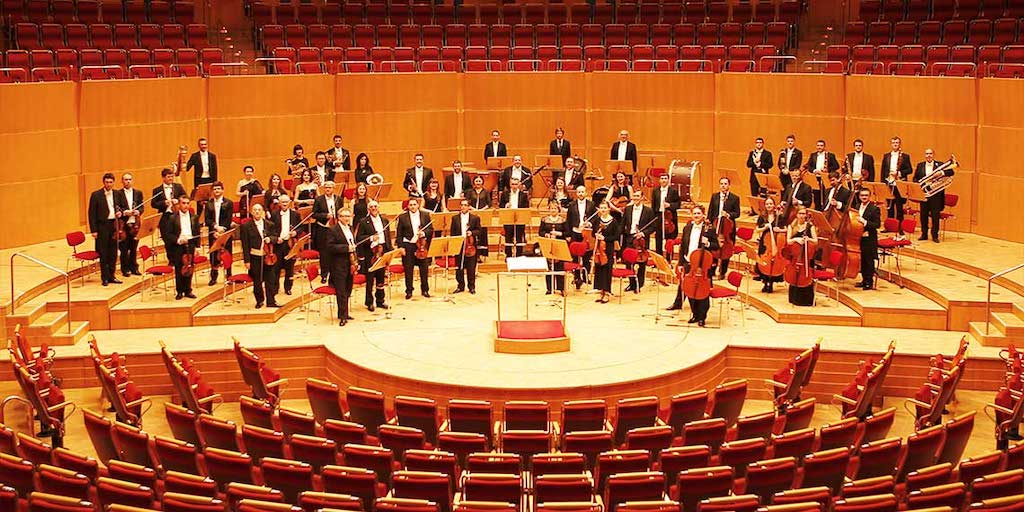 Miguel posts what’s on notices on his Lanzarote Information web site and on our all across the arts pages on this platform he offers us we try to complement that with a news, interviews, previews and reviews service that sees us move from classical music to Cuban music, flamenco to folk, and from dance to drama. We would love to see more of our new residents and visitors enjoying the myriad cultural events that take place all over the island, and that is why we are delighted to bring you this comprehensive preview of a festival to be staged in January and February.

The 36th yearly edition of Festival Internacional de Musica de Canarias (FIMC) will be here on the islands of Lanzarote and La Graciosa as early as January and February to offer six of the concerts scheduled. That means we will be treated to four glorious concerts, two of which will be free !

We will be welcoming The Russian Chamber Orchestra of St. Petersburg, one of the most sought after chamber formations in Europe; Camerata Royal Concertgebouw, formed by members of the famous Royal Concertgebouw Orchestra in Amsterdam; the Cassadó Duo, who captivate audiences because of their originality and charisma; the Ainur Choir, which will perform Fauré’s Requiem with musicians from the Las Palmas Symphony Orchestra and the Ornati Quartet, with a program entirely dedicated to Beethoven.

The concerts will take place at the Church of San Roque, in Tinajo, Cueva de los Verdes and Jameos del Agua, in Haría, Convento de Santo Domingo de Teguise, and at the Teatro Víctor Fernández Fpar Gopar ´El Salinero´, from January 10th to February 8th , 2020.. Tickets for the other three are now available on the website of Cultura Lanzarote y en www.entrees.es.

Dee and I this morning joined a gathering of print and electronic media journalists at the Teatro Víctor Fernández Gopar ´El Salinero.´ It was convened by the The Cabildo de Lanzarote and present were the Councillor of Culture of the Cabildo de Lanzarote, Alberto Aguiar, and the director of the Festival. Jorge Perdigón. stated at the press conference that he is looking forward to the impact of ´having all the concerts scheduled from Friday to Saturday. Every week there will be at least one concert on the island. It is a very important programming for Lanzarote and La Graciosa because the artists who play are ´top notch,´ he told us, before thanking the Cabildo for its collaboration in organizing the event.

For his part Alberto Aguiar, advisor of Cultura Lanzarote, thanked the collaboration of the Government Of The Canary Islands in ensuring The Festival would arrive here again on the islands of Lanzarote and La Graciosa.

´Audiences from both islands will be able to enjoy some of the best orchestras and classical music groups on the European and world scene. In this regard, I would also like to thank all the municipalities for working in collaboration with Tinajo, and other entities such as the Bishopric of the Canary Islands or the Tourist Centers”, said the Councillor of Culture.

´Finally,´ Aguiar continued, ´I want to encourage the citizens of both islands to attend the concerts and enjoy the performances. It is not every day that you are lucky enough to be able to listen live to orchestras such as the Camerata of the Royal Concertgebouw of Amsterdam or the Russian Chamber Orchestra of St. Petersburg,´ the councillor concluded.

The Ornati String Quartet will play on La Graciosa and at Tinajo on Lanzarote, thanks to organisation by the Culture Department Of The Government Of The Canary Islands, in collaboration with The Cabildo de Lanzarote.

In fact, the Festival will begin on La Graciosa on Saturday January 10th and in Lanzarote on January 11th. The churches of Nuestra Señora del Carmen (Caleta de Sebo, La Graciosa) and San Roque (Tinajo), will respectively host a concert of the Cuarteto de Cuerda Ornati, composed of musicians from the Gran Canaria Philharmonic Orchestra, who will play on the eight islands with a program dedicated to Beethoven. With this, the FIMC pays homage to the German genius on the 250th anniversary of his birth.

Sergio Marrero (violin), Adrián Marrero (violin), Adriana Ilieva (viola) and Carlos Rivero (cello) integrate the Ornati and define themselves as ´lovers of chamber music´. In this sense, their membership in the quartet ´places them in the best space to express and share, as well as delve into the works of the great masters of history´. Among these great masters is, of course, Ludwig Van Beethoven, whose ephemeris will ensure The Canary Islands begin the year with this concert tour centered on the string quartets he composed.

Dúo Cassadó, who have previously appeared at one of Lanzarote’s famous Camel House Concerts, esteablished by Sir Ernest Hall, will perform on Saturday 18th January in the Cave of the Greens, at 8.30pm. This prestigious formation consists of Marta Moll de Alba (piano) and Damián Martínez (cello), who have been performing together for twenty years. They will do so here within the framework of the Festival with a program called ‘Ibero-American Ecos’, with works by Cassadó himself and E. Halffter, Falla and Piazzolla.

It is a formation internationally acclaimed for its exquisite musicality and sensitivity, and for captivating both audiences and expert critics thanks to its originality and charisma. They have performed in prestigious auditoriums around the world and have two extraordinary recordings: ‘Rhapsody of the South’ and ‘Red’. Dúo Cassadó was recommended by the great Alicia de Larrocha as the brightest duo representing Spanish chamber music.

Ainur Chamber Choir appear a few days later, on Friday 24th January at 20.30 hours in the Convent of Santo Domingo (Teguise). The Coro de Cámara Ainur and a group of musicians from the Las Palmas Symphony Orchestra will, together, perform Gabriel Fauré’s excellent Requiem, in its 1893 version. With José Brito and Mariola Rodríguez as music and choir directors, respectively, they assume one of the top works of the religious repertoire. It tells a ´different´ oratory, as Fauré himself described it. Indeed, it is an innovative work because, among other things, the French musician modified the traditional liturgical order, omitting the Sequence and adding a celestial ending.

Thus, it is a splendid opportunity to be able to hear it in the atmosphere for which these kinds of works were conceived: the churches. They will do so in several temples of the Archipelago, in seven concerts whose first part will be in charge of the choir, with sacred pieces from the sixteenth century to the present day.

Friday 31st January at 20.30 hours in the Auditorium of the Jameos del Agua is the turn of the Camerata Royal Concertgebouw de Amsterdam, one of the best chamber formations in the world, which arrives in the Islands under the direction of the Spanish oboist Lucas Macías Navarro. It presents a program consisting of Dvorak’s ‘Bagatelles’, Alban Berg’s ‘Seven Early Songs’ and soprano Judith van Wanroj, and the chamber adaptation of Mahler’s Symphony No4.

The Camerata of Amsterdam’s celebrated Royal Concertgebouw, composed of members of this prestigious orchestra, has become a world-renowned chamber ensemble, praised by the New York Times for its ´warm and brilliant performance´. Each season they perform about 50 concerts and, in 2020, one of their first stops will be the Canary Islands.

The 36th Festival will close on the island on Saturday, February 8th, at 8.30pm, at the Teatro Víctor Fernández Gopar ´El Salinero´, with a recital by the Orquesta de Cámara Rusa de San Petersburgo.

With thirty years of experience and founded by musicians of the prestigious Rimskykorsakov Conservatory, they have become ambassadors of the great talent and high musical level of the Russian city. An extraordinary and extensive repertoire, spanning Baroque to contemporary music, has made it one of the most sought-after chamber formations in Europe. Thanks to its virtuosity and extraordinary sound, the orchestra regularly collaborates with world-renowned soloists in the most important concert halls and international festivals. Under the direction of Juri Gilbo, they will be responsible for premiering the commissioned work of the Festival, by the Canarian composer Manuel Bonino, in a program that also includes works by Stravinsky and Schubert.

All the information about this exciting series of events is on the website of the FCIM and on that of Cultura Lanzarote as well as of Cabildo de Lanzarote.

We will also keep you informed here on Sidetracks And Detours of any further details we are given and hope to see some of you at some of the events. I’m usually the guy fumbling around for my pen in the dark of the theatre, and should you recognise us come over and say hi. We’re always interested in your responses to what you have seen and heard.

Meanwhile look out for more news, previews, interviews and reviews both here and on the Lanzarote Information web site.

Finca de Arrieta comprises a selection of luxury eco properties in a stunning location facing the beach of Arrieta in the north of Lanzarote.