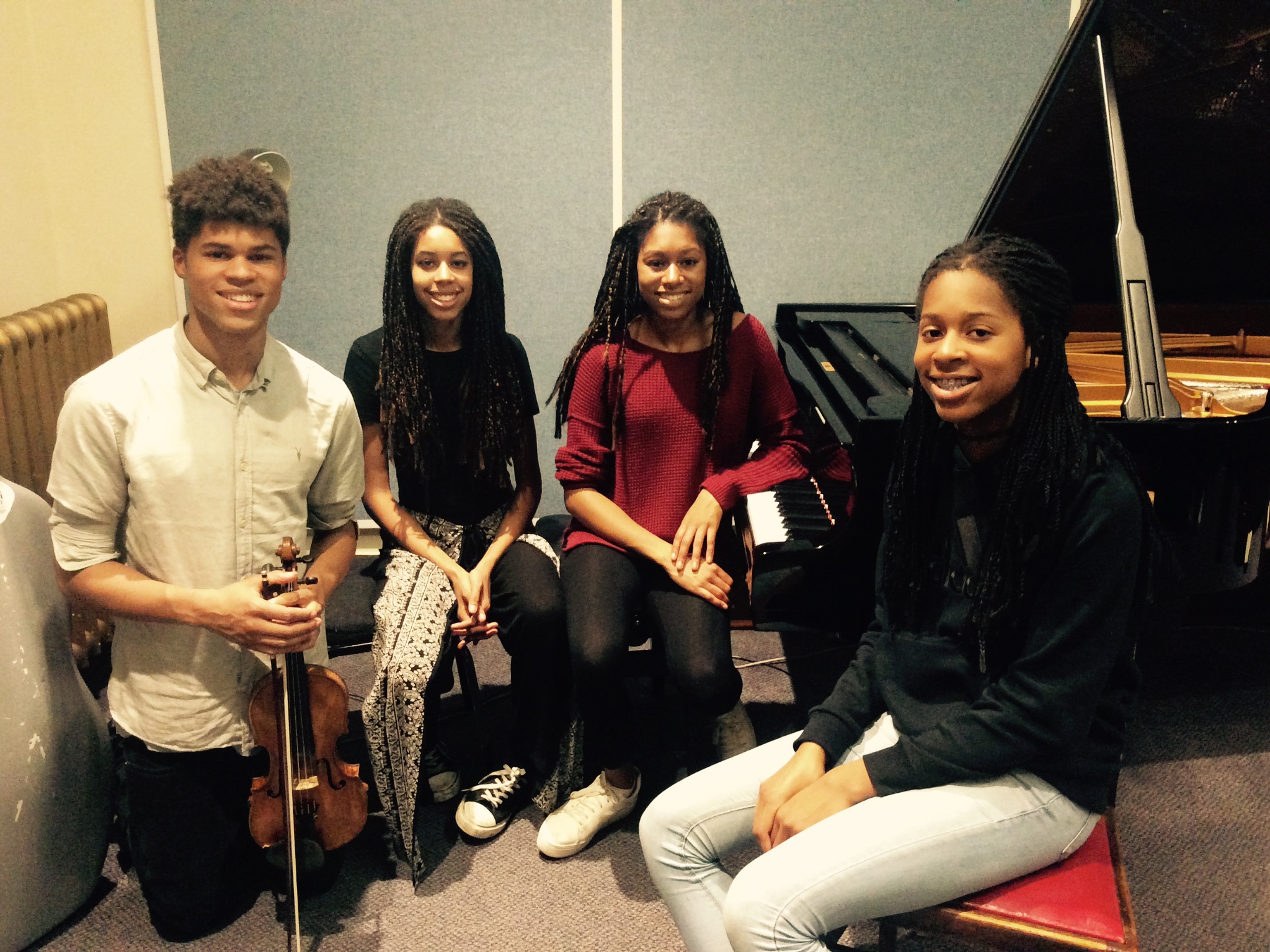 They could almost be the musical family Johnny Cash was referring to in the song Daddy Sang Bass (And Mama Sang Tenor), for the parents and their seven children all seem enthralled by making music. They all seem to believe that, as the lyric has it, music seems to soothe a troubled soul. Of course, anyone already aware of them or who heard some members on The Prom broadcast on Friday 11th September from The Royal Albert Hall will be well aware that we are blending our country music with classical.

This is the story of a large family that could actually be a small orchestra.

A record number of nearly six hundred books were published in the UK on 3rd September, made up of several that had their publications postponed during the country’s national lockdown. One of those books has been described as a moving and inspirational account of determination, music and love.

The biography, House of Music, is also so much more. It is a story about race, immigration and education. It is the story of a mother and her family. And it is the story of her children, seven phenomenally talented musicians. For the first time, Kadie Kanneh-Mason opens up about what it takes to raise a musical family in a Britain divided by class and race. She looks back to 1963 when her mother, the nineteen-year-old daughter of a Welsh family, defied everyone and sailed off to join her fiancé and his family in Sierra Leone. Through this personal journey and what follows, the book charts the story of immigration, determination and hard work of a remarkable family succeeding when everything seemed stacked against them.

This remarkable mother, Kadiatu Kanneh-Mason, is a former lecturer at Birmingham University and the mother of seven children.

Sheku Kanneh-Mason, her third eldest was the first black musician to win BBC Young Musician in 2016 and performed at the wedding of Prince Harry and Meghan Markle. Two of his siblings are also former BBC Young Musician category finalists and the eldest, pianist Isata, has also presented for the Proms.

Collectively, the Kanneh-Masons have performed at the 2018 BAFTA Ceremony and concert halls across the world and like many fellow musicians during the lockdown months they turned to performing live on Facebook, attracting huge audiences for ´concerts´ performed from their family home in Nottingham. These precious moments of family life and music were beautifully captured in the BBC’s recent Imagine documentary.

One of the brightest young stars on the classical music scene, Sheku Kanneh-Mason, became a globally known name when he performed in 2018 at the wedding of the Duke Amnd Duchess Of Sussex. According to his own personal web site, a global audience of nearly two billion people saw his performance.

Only four years after winning the 2016 BBC Young Musician competition, Sheku is now in great demand from major concert halls and by orchestras around the world.

His debut album, Inspiration, was recorded for the Decca Classics label and featured the Shostakovich Cello Concerto Number 1, with The City Of Birmingham Symphony Orchestra and Mirga Grazinyté-Tyla. Later that same year Sheku was announced as the industry´s Male Artist Of The Year and also won the ´Critics´ Choice´ award at the major re-launch of the ´Classsic Brit Awards Ceremony and in the following month, July, he received the new Brit-Certified Breakthrough Award.

It was in January of this blighted year of 2020 that he released his second album, entitled simply, Elgar. The music was centred around the composer´s cello concerto which Sheku recorded at Abbey Road studios with Sir Simon Rattle and the London Symphony Orchestra. Reaching number 8 in the UK official album chart, it made Sheku not only the youngest classical instrumentalist to reach the UK top ten, but also the first ever cellist.

He has already played with the likes of The Seattle Symphony, Frankfurt Radio Symphony and the Baltimore Symphony Orchestra. So long as covid19 doesn´t intervene he will play later in the year with The Los Angeles Chamber orchestra and the Halle,

There is even talk of a tour of the United States with The Chinekei Orchestra and a family musical tour of Australia with his six massively talented siblings.

His recital performances have already included playing in the Milton Court at The Barbican, The Theatre Des Champs Elysees, Conservatorio di Milano and a critically acclaimed tour of North America where audiences in Los Angeles, Vancouver and The Carnagie Hall in New York were enchanted by his playing.

Having already played the Proms on several occasions now, Sheku feels that making classical music accessible to all is vitally important and as such is proud to serve as an Ambassador for music education charities, such as London Music Masters and Future Talent. He is now into the second of a two year role as Young Artist In Residence at The Royal Liverpool Philharmonic. In this capacity he not only performs frequently in Liverpool during his tenure but also takes part in the orchestra´s education services.

Classical musical followers in the UK are already well aware of the pedigree of this musical family, as Sheku has already performed with them at the wonderful Evening of Roses the 2018 Bafta Awards show at The Royal Albert Hall.

The previous year at the same event he performed Leonard Cohen´s Hallelujah, with its subsequent recording going viral on You Tube.

He has also won the South Bank Sky Arts breakthrough award, following Stormzy as a previous winner and has played at Number 10 Downing Street during Black History Month.

Currently Sheku is under a full scholarshop at The Royal Acadamey Of Music. As a keen exponent of chamber music, Sheku also performs with his sister Isata, and his brother Braimah in The Kanneh Mason Trio.

There has also been perhaps his greatest honour yet, awarded earlier in this very strange year as he received the MBE in the 2020 new year’s Honours List

The instrument he plays is an Antonius And Hieronymus Amati Cello, C.1610 which is on loan to him from a private collection.

All that would be amazing as the cv of any musician but placed in the context of being one seven brothers and sisters all capable of a rare musical excellence it generates an even greater public awareness and scrutiny than would otherwise be the case. His eldest sister has released her first album showcasing the works of Clara Schumann.

Don’t assume, either, that these must be siblings benefitting from some expensive, cloistered and privileged education. The fact is they all attended a state comprehensive in Nottingham

The new book, House of Music, written by their mother somehow explains how that could possibly have led to these incredible results. Whilst she speaks openly about what it takes to raise such a musical family in a Britain still confused and divided by notions of race and class, the book emerges as a tribute to the power of determination, and celebrates heart-warming camaraderie and a lot of hard work.

House of Music is a gem of book, telling of this remarkable family, the Kanneh-Masons. It is, though, more a book that reminds us to nurture our children as the greatest gift (and responsibility) we will ever have. The biography is at once an eloquent memoir and a joyous affirmation of life, in a year in which such affirmation has never been more needed.

A Prom was broadcast for free on Friday 11 September 2020 as, sadly, it was not possible to have a live audience at the Royal Albert Hall for this concert.

For this specially pre-recorded Proms recital Sheku was joined by 24-year-old Isata Kanneh-Mason, the eldest of the family’s seven musical siblings, who released her first solo CD last year to great acclaim.
Continuing the 250th-anniversary celebrations of Beethoven’s birth, their playing of his C major Cello Sonata reflected the concentration of expression and form typical of his late period. By contrast, Barber’s sonata, though written in 1932, looked backwards, its drama and lyricism rooted in the Romantic era.
Bridge’s passionate, youthful and lightly Impressionistic Mélodie was followed by Rachmaninov’s post-Romantic sonata, a full-blooded cornerstone of the cello/piano repertoire whose macabre scherzo movement and joyously ebullient finale contrast with a slow movement of melting bittersweet indulgence.

The full programme is listed below

I have since received an e mail from Shektu Kanneh Mason telling me he is proud to to announce the first ever Kanneh-Mason family album!

´It features Carnival Of The Animals and other favourites of ours,´ Shektu says, ´as well as brand new poems written by Michael Morpurgo and read by him and Olivia Colman. This has grown from our passion as a family for making music together and we can’t wait for you to hear it.´

´As young children, the power of combining music with storytelling is truly magical and we are honoured to have collaborated with Michael and Olivia and the wonderful musicians who joined us, to create music that celebrates our connection with the natural world. Together, we want to inspire children and adults to listen more closely, to value our world and all the diversity within.´

His mother’s book, Family Harmony, is a beacon of hope and common sense in these dark times and the happiness the Kanneh Masons share in their family life has recently been perfectly illustrated in a BBC tv documentary, and Shektu and Islata played beautifully in that tv prom.

Now there is this new album to look forward. Those of you already familiar with these seven siblings and their music will probably already be heading to your computers to place an order. Others of you, hopefully inspired by this article to buy an album by musicians you had not heard of until now, are the ones I really envy. To be coming out of lockdown to meet all the challenges of a ´new normal´ what a joy it will be to discover a new generation of classical musicians who can make the world feel a better place and even add a perfect soundscape to life on Lanzarote.

With the island’s record over the years for inviting the best musicians from around the world to play here on Lanzarote, who knows, with a fair wind we might even one day see them performing here live.

Lago Verde B8 is a fabulous apartment with sea views, in the most sought after area of Puerto del Carmen, with lovely communal pool.