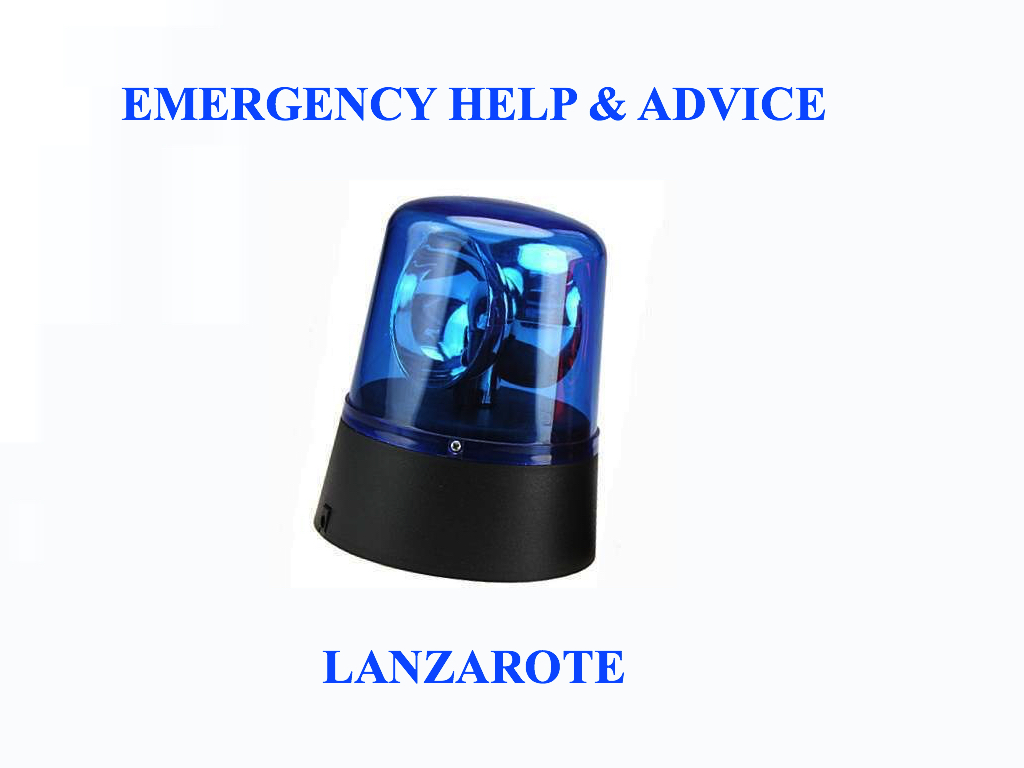 Hopefully you won’t need any of the following, but if you do need emergency numbers, help or advice whilst in Lanzarote here it is!

The local emergency telephone number for police, ambulance & fire is 112.

There is a smartphone app called FRESS112 that you can download to your mobile phone. Users should create a profile with their personal information & medical data. Residents and tourists are encouraged to download the App to their mobile phones, your medical information and location will then be transmitted to the emergency services if you need help in the future.

The 112 Freephone number is manned 365 days per year, 24 hours a day and available in five languages Spanish, English, German, Italian and French.

FRESS112 Can Save Lives. You can download the App here: www.fress112.com

Our British Consulate office is situated in Las Palmas, on the island of Gran Canaria.

If you’re in the UK and concerned about a British national in Gran Canaria, Lanzarote or Fuerteventura, call 020 7008 1500 to reach the Emergency Consular Team based in London.

Lost or Stolen Passport in Lanzarote

If you have lost or had your passport stolen you need to report it to the local Policía Nacional as soon as possible. If a passport is found locally, it is normally handed in to the police.

If you can’t speak Spanish you will need to have a translator to make the report, they will then issue you with a police report. If you need an urgent replacement for your passport then contact the British Consulate in Las Palmas who will arrange for a consular member of staff to issue an emergency travel document. The Kodak shop in the Deiland Shopping Centre in Playa Honda can take new passport photos in the required format.

If you’re just feeling unwell and need medicine or general advice then seek the help of the local pharmacy, they are very good and usually speak English. Drugs are readily available over the counter, this is the only place you can buy pain relief such as Nurofen or Paracetamol and normally come in boxes of 600mg tablets so check the dosage. Antibiotics are now only available by prescription.

You should be travelling with your European Health Insurance Card (EHIC) this together with your passport will entitle you to the equivalent of the NHS emergency service here in Spain, to access the local Centro de Salud (Doctors) and General Hospital in Arrecife for any necessary treatment during your stay. If you need an ambulance call 112.

Residents can call 012 for an appointment at their registered surgery, or use the cita previa online booking service.

For those with private health insurance or travel insurance there are an abundance of private clinics within each of the resorts for treatment and the private hospital called Hospiten is situated on the outskirts of Puerto del Carmen.

Here are some handy phrases for the pharmacy just in case….

Have you something for – tiene algo para….

Death of a UK Citizen in Lanzarote

It is Spanish law that a body must be preserved or embalmed within 48 hours of death. The next of kin will be informed by the authorities to find out if the body is being repatriated to the UK or if there will be a local burial / cremation.

If the deceased is covered by travel insurance the insurers need to be notified immediately, they will make arrangements with a local funeral director to repatriate the body. A special casket is required for the transport along with certificates for the death, embalming and permission to transport the body, arrangements will take 8-10 days.

If the decision is for a local burial or cremation then the next of kin need to contact a local funeral director to make the arrangements. A burial in Spain is normally above ground, the body is placed in a crypt for 5 years unless purchased in perpetuity. Cremations are now more popular and it is much easier to make arrangements to transport the ashes back to the UK. Please note that airline regulations stipulate that ashes must be transported in the cargo hold.

Reporting a Crime in Lanzarote

If you have the misfortune to need to make a denuncia in Lanzarote during a holiday, the 902 102 112 helpline is available in English for complaints relating to the following criminal offences:

– of and in vehicles

– of documents and personal effects

– in accommodation or establishments

* Missing documents and or personal effects

The telephone line can be used to report a theft when a burglary has taken place but not if something has been stolen by someone using intimidation or where the offender is known, in this case you have to appear in person at the police station to make the complaint.

Once you have made the call and completed the complaint details, you will be instructed to visit a designated police station within 48 hours to sign the paperwork.

We sincerely hope that you aren’t affected by crime during your holiday in Lanzarote, remember to lock your valuables away in the safe whilst you are out and don’t leave them on show in parked cars.

The Recogida de Fauna Silvestre Accidentada rescues injured wildlife in Lanzarote. Their mobile service is manned from Monday to Sunday 10:00-20:00 during the months of December to August, and 07:15-22:00 during September, October & November. Outside these hours call 112 which is answered 24 hours.

There are three different police organisations in Spain, all of them are armed. The traffic is monitored by two different police, the Policía Municipal are responsible for traffic control within the towns, outside these areas it becomes the area of the Guardia Civil de Tráfico.

The Civil Guard are responsible for national security they wear a green uniform. The Guardia Civil carry out duties for the Ministry of Defence and the Interior Ministry to protect the public’s safety, Spain’s borders (ports, airports, coastal and land), environmental laws and police traffic.

The National Police (Cuerpo Nacional de Policía) are responsible for criminal investigations, immigration and identification, they wear either a black or blue uniform. This is the police station if you need to report a crime (denuncia) you can call 902 102 112 for more information, you will have to visit in person to make a report and have a translator with you if you can’t speak Spanish.

The Municipality Police (Policía Local) are responsible to the mayor and ayuntamiento in each local municipality, they take responsibility for local traffic control, minor offences and wear a blue and white uniform.

Can you help me – puede ayudarme

Where is the police station – dónde está la comisaría

I want to report a theft – quiero denunciar un robo