Echoes At The Speed Of Sound 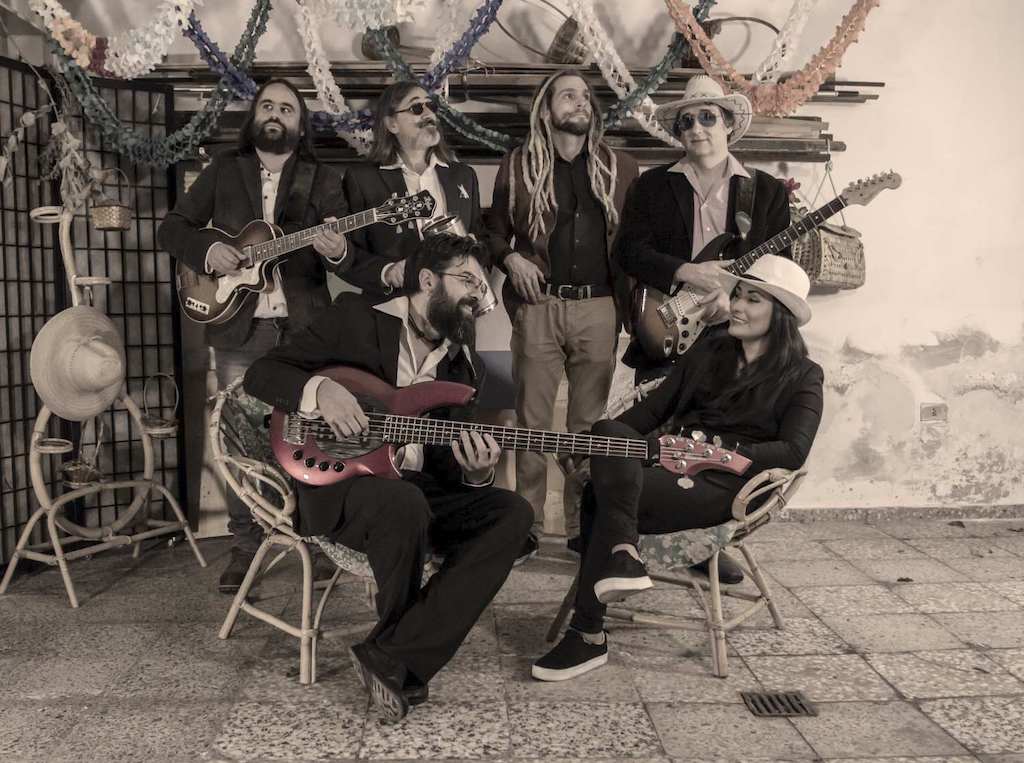 OLD AND NEW ALL IN GOOD TASTE

The old adage that ´we like what we know but we don’t know what we like´ even applies, in my case, to my eating habits. For reasons that are shrouded in mystery and fading memory I don’t eat ´Greek´ for instance and it might be argued that eat I very little but what little I do eat I eat a lot of. I have become more adventurous since coming to live here four years ago, but it was only very recently that I first tried Asian cuisine, despite having a son who has lived in South Korea for twenty years and who loves the national food.

We were on the new marina in Arrecife where the huge liners dock and had arrived early for a Sunday evening concert: so early in fact that the venue, La Grulla Bar De Cosas, a small but salubrious place, wasn’t yet open. We had ´reccied´ the area a few days earlier, on the ´toy train´, that runs cruise passengers around Arrecife. We knew from that trip and accompanying commentary that there are scores of ´posh´ yet cosy bars along the waterfront and more than a dozen splendid restaurants. In fact, we had spotted one particular such eatery, or at least she who thinks she must be obeyed had spotted it, and filed it into her memory bank. Number 38 Asian Marina served food from the range of countries implied in its name and we might have chosen from Sushi, but I couldn’t, or other Japanese foods, but I wouldn’t and in fact I was trying to avoid so many items on the menu that Dee began treating me like a mum treats a bawling toddler.

´Look,´ she said, ´there are dishes here for two people. Let’s order those and then you can watch me and what I eat and you can be a big, brave boy and try it too.´ She then smiled that evil smile that meant her suggestion was already a done deal.

The beer I ordered to help the medicine go down was cold, and golden and strong and helped settle my nerves as I tucked into enormous portions of Thai rolls with Sesame prawn toast that came with a fabulous sauce dip. The next course brought is crispy duck, pulled at our table, and a pile of pancakes, with sticks of cucumber, onions and carrots with a selection of different sauces.

As I pushed my clean, empty plate away on demolition, sorry completion, I wondered what on earth I had been worried about and what big babies some people must be. The meal had been not only delicately delicious but also gently filling and I was, as we say, replete. Just as I was patting my full stomach the waiter returned with the main course, of beef and green peppers, sweet and sour chicken and egg fried rice and more spicy sauces !! Now, most of you might eat like this all the time but I had stepped beyond the lines of duty and had survived to not only tell the tale but also to vow to return regularly in the future.

The service was incredibly polite and friendly and because this seemed to be a quiet time of day in this area, (around seven thirty) we were able to enjoy a coffee and dessert at our leisure. What had I ever been afraid of ? Every mouthful brought exciting new flavours and spices. So, we will certainly be eating there again.

My fear and trepidation in the food steaks, sorry, stakes is strange, as I consider myself incredibly adventurous and eclectic in following the inevitable Sidetracks And Detours that we take on these journeys all across the arts, so whereas I had approached the restaurant like a lamb to the slaughter I was now bounding round the corner like a wolf to the prey.

The preview in the September edition of the Cultural And Arts Agenda for the month had suggested that Orquesta Catacumbia would rock but nothing could have prepared me for what I eventually saw and heard from this Tenerife band. Nevertheless on arrival back at the venue that now had three or four tables and umbrellas and comfy chairs scattered around on its outside apron we had plenty of choice of where to sit as only one table was occupied, and it looked as if the occupants might be the band. We ordered drinks of water, no gas, for me as I never drink on duty dear reader, and a wine for Dee who, similarly never goes on duty when she’s drinking, and had a quick chat with the friendly hippy-ish young waiter who served us.

Even as he spoke the place was filling rapidly but he took the time to tell us that the venue invites deejays each week to perform and that the proprietor always tries to present new ideas. This free live performance of a new album by this band was just such an experiment. He took my card and promised to keep Lanzarote Information informed of future events, so watch this space or Miguel’s what’s on pieces.

This was an experiment that we could already see was a big success. Within a few minutes more than a hundred people had gathered, mostly of young adults in their late twenties and early thirties, but there was evidence, too, of others who like us, had somehow survived the nineteen sixties music scene. To our amazement, most of them crowded into the small bar which was already reduced in floor space by microphones, amplifiers and instruments, and now six musicians, crowded on to a small stage. Maybe about a dozen of us remained outside, to listen from there. We could clearly see, too, through floor to ceiling plate glass windows and so I was fully immersed in what was to be more than ninety minutes of innovative, tuneful, rhythmic music that supplied such an irresistible beat that everyone in the room was hopping and bopping and jumping and jiving from the very first note. Before the end of the opening verse I was making frantic notes: ´these guys know what’re doing´ I wrote, to begin with.

The line-up seemed to be of two electric guitarists, electric bass-man, two percussionists and a lead vocalist each musician knew their own abilities as well as they knew the abilities of their colleagues. They were comfortable, and somehow, enhanced in each other’s company. They each brought their own reference points to what they were playing, including traditional, national styles, contemporary cadence and eclectic listening. As quickly as I thought I recognised echoes of The Flying Burrito Brothers we had reached Gram Parsons and the Byrds giving the eye to the Sweethearts Of The Rodeo, and here there was Poco and there The Eagles and everywhere was sheer enjoyment in each others´ skills.

It was not only a rekindling of that moment in my youth when country begat rock and country-rock begat Americana but here was also the jazz fusion of Blood Sweat And Tears, and just to blur even those edges there was funk, Eastern European pieces of polka and the bright pop music of one-or-two hit wonders like The Kursall Flyers remembered for their own strange creation of Little Does She Know in 1976. I felt, too, as if I were listening to a modernisation of Rock The Kasbah by The Clash, but it was as if they had ensured the modernisation did not in any way sanitise or dilute its power.

As I look at my notes again, now on the cold light of the new morning, I see writ large is the name of Jonathan Richman And The Modern Lovers, similarly an outfit who were, and still are, rooted in rock and roll but receptive to styles of music from all around the world, as evidenced by the confusing title of their biggest UK hit, Egyptian Reggae.

Orquesta Catacumbia play with a similar sense of wide eyed child-like wonder. The album, La Tercera Vaca, from which nearly all these songs were taken, was released in March 2019 and might just become one of those collectors´ items of which a few lucky people might be able to one day say, ´ I bought this before they became famous. !´

Fame might not be their spur, though, if you’ll forgive my Howard Spring. In fact, despite that child-like wonder they appear on stage to be as casual and laid back and wisened and sage-like as a band that Mark Knopfler and Dire Straits introduced us to.

The lyrics of The Sultans Of Swing tell us of an extraordinary, ordinary band plying their trade round the pubs and clubs of ´Sarf´ London, seemingly so comfortable in their own legend that they were immune to the temptation of riches that might await them in the form of recording contracts.

Orquesta Catacumbia are perhaps slightly more worldly wise, having already recorded their debut album, but for all that they seem content to play to happy, shiny people like this crowd.
Tonight they brought back memories of the hot and sweaty clubs in Hamburg in the late fifties and of The Cavern in nineteen sixties´ Liverpool. Their music recounted Bo Diddley beats and re-created Beatle-esque vocal backing but this band could be so much more than a reminder of the past. They just might be a signpost to the future of rock and pop.