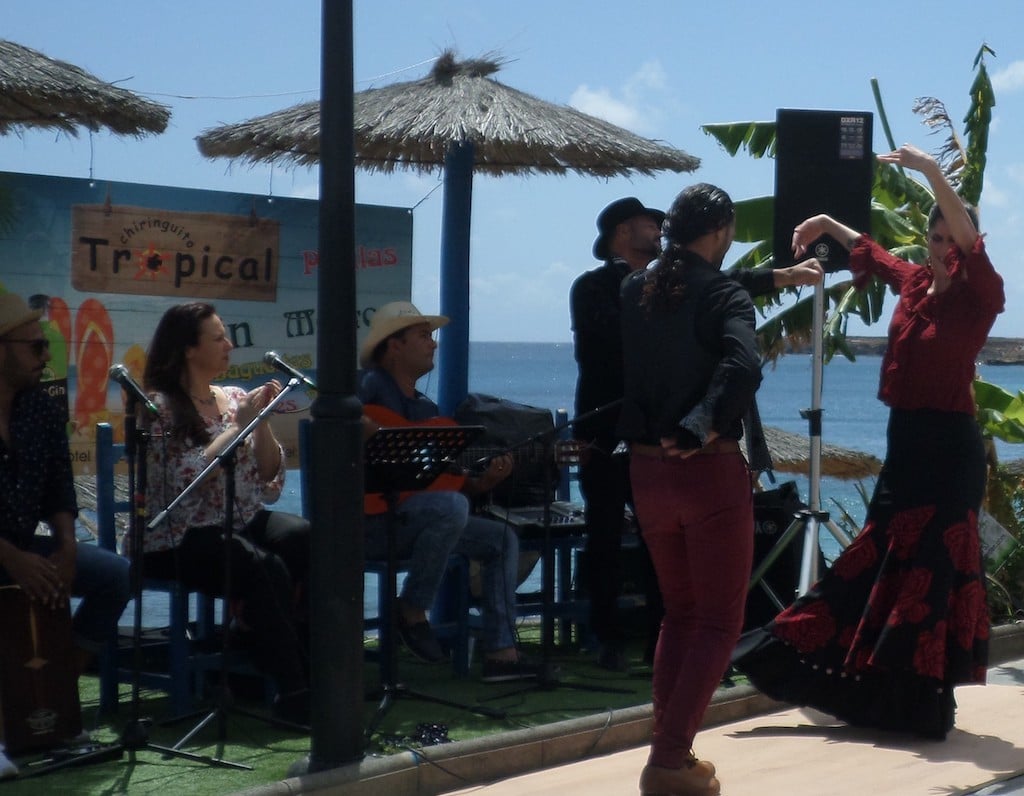 FLAMENCO AND PAELLA AT PLAYA BLANCA

Recorded Euro-pop music surfed the sound waves, a glorious perfume of paella wafted through the air and more than a hundred people proved the goodness of human nature by either giving time working for, or contributing money to partake in, a perfect Easter afternoon at Playa Blanca recently, raising money for the Creciendo Yaiza charity that helps handicapped children, Staff and volunteers, and associated sponsors at Chiringuito Tropicano bar made fantastic vats of chicken paella, which we could wash down with wine, beer or soft drinks. The view across to Fuerteventura was spectacular and the whole scene hummed with excitement. Lazing with friends by a beach bar under a shady umbrella surrounded by a mix of indigenous islanders, new residents and tourists all mingling happily we enjoyed listening to the sounds, eating and drinking and watching the sun drop diamonds on the water as we watched the world go by.

We had been alerted to the afternoon event a week earlier by our friends at The Italica restaurant in Matagorda when the owner, Carlos, told us he would be singing at the gig. We have heard him perform a number of times and his love of music is always infectious, so off we set down the sea walk from the centre of Playa Blanca towards the lighthouse. About half way there Dee’s mobile rang and I quickly gathered she was speaking to our friends, and occasional contributors to these pages, Iain and Margaret. It seemed they were about five minutes behind us and were just ringing to see if we knew about what sounded like a great event down near the lighthouse. Far from certain that we could maintain our five minute lead we agreed that whoever arrived there first should save eight seats, as they had another four friends in tow as well.

The live music was a treat, as always. Accompanied by a guy playing a beat-box, an instrument said to have been invented by former Manchester United star Dion Dublin, and a gentleman playing beautiful Spanish guitar, Carlos sent his voice soaring up into the blue skies, as two other members of his little band danced flamenco on a board in front of the makeshift stage beside the path. The tall, and incredibly slim and elegant female and her waist-coated male dance-partner were artistes we had seen before at Italica, and it was great to see them calling up volunteer dancers from the audience and encouraging young children to have a go, too. Carlos was also accompanied by an always smiling female singer who also had a powerful voice.

All this was in front of an ocean backdrop and against a bustling scene of pram-pushers, cyclists and swimmers. This busy scene was was multi-generational, with new resident-oldies likes us sitting comfortably amongst teenage islanders without a wrong word one. Spanish, Italians, Germans, English, Irish people of all ages, and I’m sure from many other nationalities, too, provided a global atmosphere.

There was even extra entertainment provided by Margaret who spent the afternoon in constant search for one of free hats that were given to everyone who bought tickets for food or drink,…..¨but you’re already wearing your free hat´ we all said, thinking perhaps she had forgotten. She replied that was all well and good but she wanted one of the green ones ! As so many Saturday afternoons of the Easters of my life had been spent watching Bolton Wanderers lose at home in the pouring rain, I found this new variation of hunting for an Easter bonnet a thrilling diversion from the more traditional pace-egging.

The afternoon had stretched from mid-day to gone six o’clock before we left after the sounds of Carlos telling us in Spanish that he had done it all ¨My Way´, the signature song of his act that we have now heard several times.

It should be noted, though, that whatever way he had done it, he and his musicians, and his hard working wife Melly and everyone else associated with this afternoon must have raised several hundred pounds for a very deserving cause and had provided wonderful entertainment in doing so. Lest you think, though, that my Easter was all hot cross buns and chocolate eggs let me remind you that I watched Lanzarote lose at home on Good Friday and then heard on the BBC World News that ¨the Trotters´(Bolton Wanderers) had been relegated to England’s third division !

A total of 3,191 entries from 116 nationalities have participated in the competition of short films in this year’s annual festival, of short films and audio-visual culture. The event is run by The Department Of Culture Of The Council Of Lanzarote in association with Fisme Productions.

This year has seen record levels of not only products entered but also of the number of countries presenting them. In the category for International Short Fiction there were 1,704 works. The National Short Fiction category also had its most ever subscriptions of 622 pieces of film whilst Short Documentaries was a category with 460 entries submitted and Animated Short Films received 359 films. The section for Short Canarian Films received 46 entries.

Since last October, a selection Committee of movers and shakers from the world of culture and cinematography has been viewing 3,191 movies. After discussing the technical and artistic aspects, they have agreed an official selection of 91 short films that Lanzarote viewers will be able to enjoy on the big screen from 10 to 18 May. We will bring you further details of times and venue, of course, as we receive them.

These short films were shot all over the world in 2018, in a list of countries that begins with A for Armenia, Albania, Argentine, and moves on through B for Bangladesh, Burma, Bahrain and Brazil into C for, ….. well, you get my drift.

There have been several stories submitted reflecting the concerns of Canarian, Spanish and international filmmakers. In addition to a trophy and a 1,500 Euro prize for each category, authors of winning Spanish Productions in the Short Documentary and National Short Fiction categories will also be invited to represent their work at the Goya Awards ceremony, which is a lead-in event to the nominations for recognition at The Academy Of Sciences And The Cinematic Arts Of Spain which are announced at the end of the year.

For further details check out  www.festivaldecinedelanzarote.com

I’ve been here four years now but still consider myself a new resident of Lanzarote and the thought of ever leaving its shores again has never entered my mind. However, I might just be tempted by a short crossing in the summer to La Graciosa. There is an exciting few days to be shared by these two islands in June, as it is now 220 years since Alexander Von Humboldt, naturalist, giant of the history of science and considered the father of modern universal geography, landed on La Graciosa. He was accompanied a fellow, naturalist and physician, the French botanist, Aimé Jacques Alexandre Bonpland Goujaud, for what was effectively a scientific research mission.

A re-enactment of the landing made more than two hundred years ago will see lectures, conferences on cartography and interpretative tables, an exhibition, and musical recital by the Lanzarote timple player Benito Cabrera, and his Quartet. Some of these events will take place not only on land but also on boat expeditions re-tracing the arrival route Humboldt and Bonpland followed aboard the frigate ‘Pizarro’.

A theatrical re-presentation of their subsequent landing in La Graciosa, will be performed as part of a program of activities scheduled over 14th, 15h and 16th of June on the eighth Island. This celebration is being organized by the Fundación Canaria Orotava of history of Science (FUNDORO), in collaboration with the Cabildo of Lanzarote and other organisations.

Pedro San Ginés tells us that ´the dissemination and knowledge of the landings of Humboldt in La Graciosa in 1799 will contribute reinforcing the rightful place the eighth Canary Island also has in the history of science.´

The commemorative events are open to any interested members of the public and will be facilitated through the participation of leading experts in different disciplines seeking to bring history to life.

For his part, director of Fundoro, Miguel Angel González Expósito, thanked the Cabildo of Lanzarote and its biosphere reserve for the support offered to this three-day meeting, convened to add value to the relationship of this important giant of science with La Graciosa.

´The story about what Humboldt did to reach the island is one that deserves to be recounted´, stressed the head of Fundoro.

Gonzalez Exposito also thanked the support of the municipality of Teguise as well as the autonomous organism of national parks. He especially emphasised the involvement of Teguise in working with La Graciosa, and notably Alicia Páez, Councillor and Chair of Adviser of the first Corporation insular, along with Luis Arráez Guadalupe, for their ´support since the Foundation presented the project since the first months of last year where we started to harden the initiative to commemorate this anniversary.´

The Program Director of Fundoro further explained some relevant data about Humboldt and added that ´Humboldt’s name has been linked traditionally to Canary Islands.

This is because of his visits to Tenerife, and ascent of Mount Teide and the subsequent identification of the famous stages of vegetation and environmental conditions, varying with altitude above the sea level, that the local plant species depend on. Much less known is the fact that the illustrious German naturalist stepped for the first time beyond continental European soil when he landed on the north-eastern part of the island of La Graciosa.´

A comprehensive celebratory program includes the inaugural lecture by Agustín Guimerá Ravina on ‘Humboldt And Landing In La Graciosa’ and the opening of an exhibition which will be shown on Graciosa for its inaugural day, on June 14, in Caleta de Sebo. This will conclude with a concert by Canarian music by timple player Benito Cabrera and his Quartet, before subsequently transferring to the Cabildo of Lanzarote to reach wider audiences.

The anniversary celebrations then continue on Saturday, June 15, when Arnoldo Santos and Pedro Barba present a talk on the plant species and biodiversity that Humboldt encountered in this island territory. In Pedro Barba, that same Saturday, June 15, at 12:30 Humboldt’s landing will be re-staged by a professional theatre company.

In the afternoon at 17:00 hours, in the Playa de Las Conchas of the autonomous organism of national parks, there will be interpretive tables to inform an interesting didactic talk about cartography that will be offered by the expert Juan Antonio García Cruz. This will explain the reasons Humboldt came to La Graciosa, misinterpreting his navigational charts, and assuming the island as being an extension of Lanzarote.

The three commemorative days will close on Sunday, June 16th, when an excursion boat recreates the arrival of the scientist in this Canary Island, as ´masters and crew´ offer historical facts to add gravitas to the ´cruise´.

Those interested in participating in the full schedule and staying in La Graciosa that weekend, should contact the Organisers at Fundoro on 922322862 or on the web.