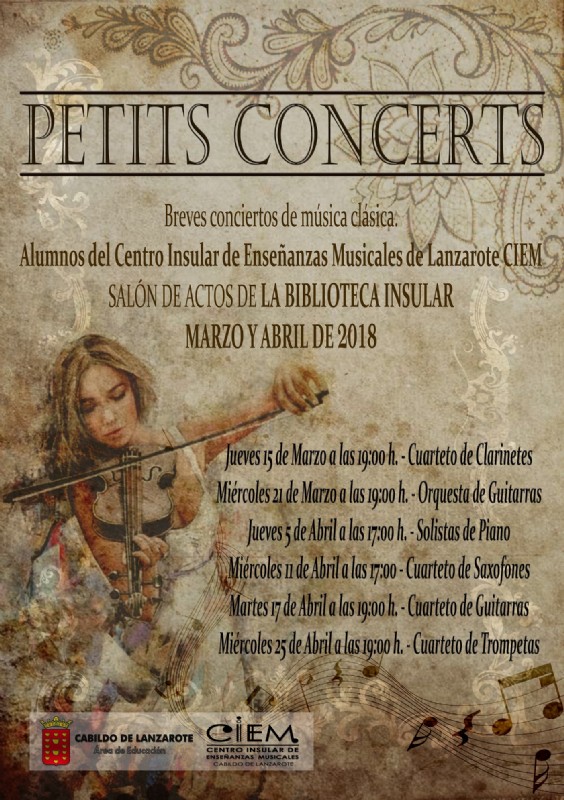 The performance by the Coral Polofonica San Gines had been absolutely superb, but we noted with glee that it was only one of four free performances over the course of the next few days offering a taste of different kinds of music.

So, only two days later we saw four young musicians from the Academy, delivering a rendition in the Biblioteque opposite UD Lanzarote football ground in Arrecife.

The three young ladies and one young man appeared to be in their mid to late teens and took to the stage with a confidence and no sign of nerves. I know from my own days as young performance poet that I always much preferred a full house, (though they turned up only in my dreams) to an empty room, and it has to be said the room was less than full.

The quartet performed though as if to a packed Albert Hall. Their musicianship, even at this young age, was quick and nimble and gave us something of each of their personalities. We had been told in the introduction that this was a classical concert and there were indeed passages from that genre that we instantly recognised.

There was one piece, however, that from its first note began to niggle at me. I knew the rhythm, I thought, but this seemed more soberly paced and slightly prettier than whatever it was I was half-remembering. Suddenly it came to me and I wanted to jump up and strut down the aisles, kick out my ankles and sing along to New York New York!

The concert lasted only forty minutes, but it was wonderful and memorable and it will be intriguing to try to follow these careers and see how high each of them might climb.

A very tasteful, modern 3 bedroom, 2 bathroom villa; newly furnished with lovely comfy seating in the lounge and in the garden.