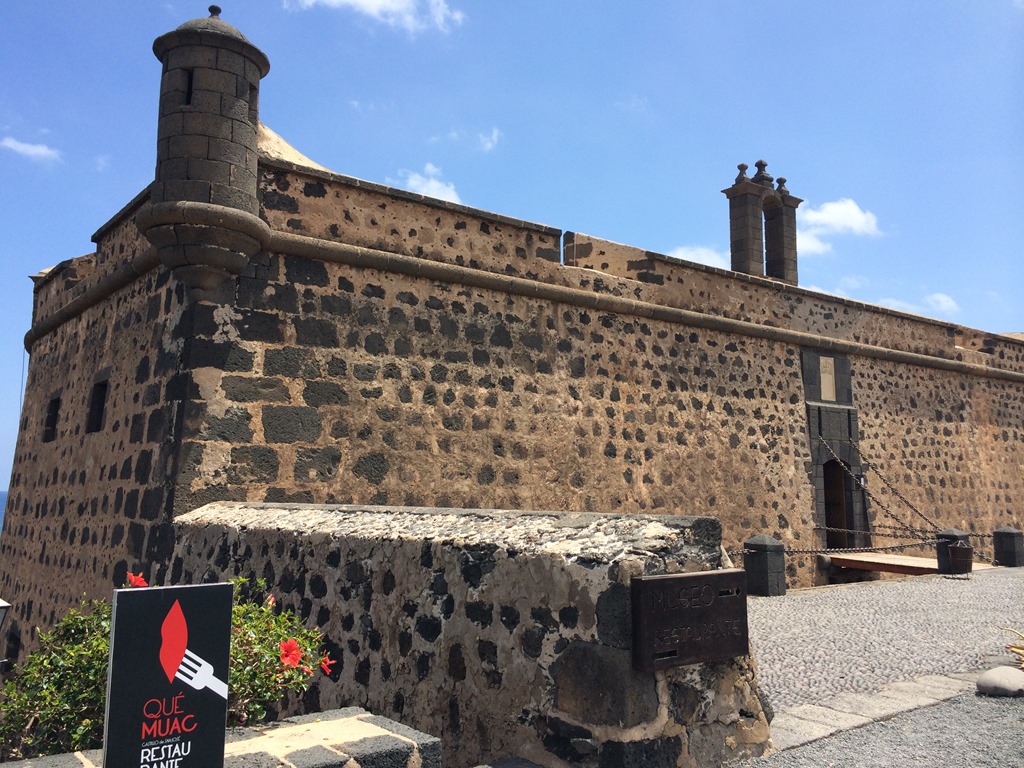 OF CONCERTS IN CASTLES

Last night, we discovered another magnificent location for live music here on Lanzarote.

The Castillo De San Jose stands on the waterfront of Arrecife. Once a lookout point to warn off the sailing vessels of invading Moors it now overlooks a re-gentrified area, with huge cruise liners standing proudly in the distance. It may be a fairly un-prepossessing building in daylight, small and squat and easy to drive past in the daylight. At night, however, it is subtly illuminated to look very welcoming. As you arrive at its front entrance you are immediately struck by how much land it stands on and after walking down a few gentle stairs cut into the stone, you step through the front door to realise this is less a castle than a Tardis. You are amazed by a huge circular indoor area that once would have been a castle floor but is now an opulent restaurant area. The front wall is entirely of darkened glass, offering panoramic views of the ocean. This is an architectural trick, too, as those seated at tables looking through that glass can also see reflections of the band playing on the stage in front of them

We had come because we had read that there was to be a concert by the Yul Ballesteros Quintet.

Yul is considered one of Spain’s most talented guitarists with a holistic musical background as performer, composer, arranger and producer. He earned a scholarship from the famed Berklee College Of Music, Boston USA from where he graduated in 2007. Since then he has collaborated with top musicians from all over the world. He is now a Professor at The Canary Islands Conservatory Of Music and was co-founder of The Big Band de Canarias.

We had read, in one of the monthly arts events promotional leaflets that you can pick up the Tourist Information Offices, that he was visiting Lanzarote to play his latest writings, only recently committed to CD.

I am not sufficiently a connoisseur to tell you whether what they played was, technically, jazz but there were superb solo riffs throughout, all drawing sustained and enthusiastic support from the audience. Meanwhile silent and almost invisible waiters and waitresses glided between tables to serve drinks to people who had buzzed the table lighting for attention. Nothing, however disturbed the music.

Yul and his superb musicians delivered perfectly, both as individuals and as a quintet. The percussion and double bass strongly underpinned, and at times drove, the saxophone and guitar to seemingly unattainable heights. As for the keyboard player, he seemed to play a lot on what I call ‘the Bruce Hornsby part of the keyboard’, and anyone who has heard the ‘country’ song, The Way It Is, by Bruce Hornsby And The Range will know just how flowing was the piano-playing here.

The Yul Ballesteros Quintet played all the tunes from the album Nine Tales From The Inner Space, cleverly leaving out Just In Case, so its title could be used as a joke to introduce the well deserved and loudly demanded encore at the end.

During one piece, Nexus, the keyboard player shed his jacket, even whilst playing. Although Yul had obviously had the major hand in the performing, composing, producing and arranging of these pieces for both recording and concert it was refreshing to see he had the generosity of spirit to allow all of his group members solo sessions that spotlighted their individual talents and their contribution to the ensemble. As for Yul, himself, he occasionally took his guitar to occasional dynamic heights and consistently delivered tasteful and impeccable picking.

A very brief chat with the guys after the gig did indeed reveal that the keys player was aware of the music of Bruce Hornsby and that Yul had really enjoyed the performance.

We ourselves had witnessed a fantastic show and found the whole cabaret style atmosphere very relaxing and had welcomed the opportunity of meeting new faces and enjoyed the company of a Dutch couple, holiday making on the island again after thirty years. Somehow sitting at a shared table over drinks you speak to your neighbours more than you might at a traditional concert venue.

So, we owe a debt of thanks to that little Agenda Cultural Febrero booklet we had picked up a few days earlier, in which we have already pencilled in dates to visit two arts exhibitions, by Nicolas Lais and Marco Alom at Cic El Almacen where we will also be seeing a Timple And Guitar concert by Alexis Lemes and Javiar Infante on 9th March.

We look forward to bringing you reviews of these events to this space as soon as we can.