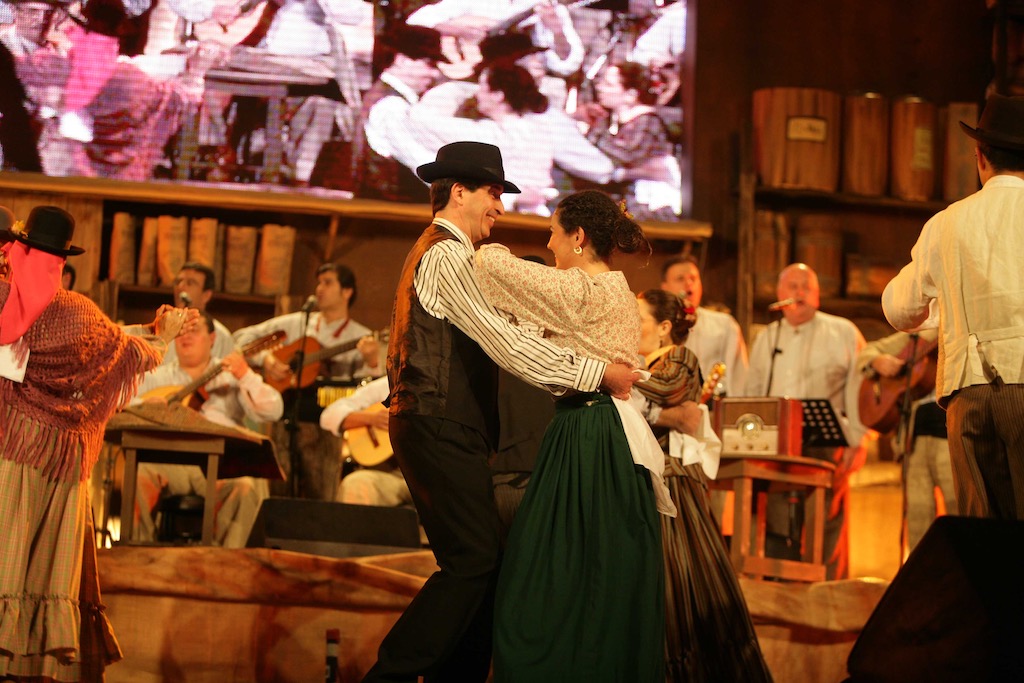 Having seen several live performances by folk-lore group Los Gofiones on many occasions we were nevertheless very disappointed to find out all the tickets for this free performance had been distributed. We had only learned about the concert on the morning of the event, and because we love these occasions we decided we would drive up to Yaiza town square where the concert was to be held, despite knowing we couldn´t be allowed into a covid-restricted audience. We hoped, instead, to find room outside the arena that might afford us space to fold down our fold ups and sit and watch and listen from somewhere isolated and afar.

Darkness was falling around what I call a finger-nail moon as we drove off from home at 8.30 pm for what we were told (but we knew better) would be a 9.00 pm start. The roads heading North to Yaiza were virtually traffic-free, with the horizon where the sky meets the end of the world, to our left, tinged a beautiful post sunset pink, and that tiny moon just appearing over the mountain ahead of us, that we know looms over the lovely town.

The first shock was that when we arrived at what we have for five years labelled the town square, having seen scores of community concerts and events there, it was empty and the town itself, always quiet, now looked deserted.

To gather our bearings we swung right, then left, then immediately right again around the town hall and could suddenly see lights and a stage and a very, very long queue of people and rows of parked cars around what is a much larger square, but only ever empty on the hundreds of time we have passed it, but that now looked as if should be the one to be titled Town Square.

After we had parked up we walked back to the arena and could see the usual covid protocols were, rightly, being followed as the crowd entered to take their seats. The stage looked glorious, be-decked by flags of the town, the island and the island group, with beautifully placed and targetted coloured lighting creating incredible colours, images and shadows on the side of that mountain we mentioned earlier. Along this stretch of pavement there was a magnificent view of all this, from a slightly elevated position looking down on to the performance arena over the wire-mesh fencing around the audience site. We set up camp, about twenty minutes before the performance began.

We were part of a perfectly, and safely, spread out line of masked, and unmasked, covid-aware viewers by the time Los Gofiones, maybe thirty strong, took to their stage in the monochromatic attire they are famous for. The moon was resting low just above them as they gave us a gloriously toe-tapping and well known opening song. This knowledgeable audience of what was probably a 99% indigenous balance immediately burst into harmonies, with a lady down the line from us having a lovely voice, and also into the intricate and expert hand clapping that so often is invited to serve as further accompaniment. It was a song we have long been familiar with, and a staple part of this kind of musical diet, but not a song we could claim to ´know´.
After such a ´poppy´ start, (see, there goes that clarification again) it was time to be reminded why we were here, and a trio of political and celebrity guests took turns to do so, including the Mayor Of Yaiza, who welcomed the President Of Lanzarote to the event.   Although we don´t speak the language, my wife who is also my Dutton The Button photographer, managed to make an overall sense of it. The event was tied to the town church of Los Remedios and was in celebration of their annual festival

Iglesia de Nuestra Señora de los Remedios, to give the place of worship its full and formal name, is sited on Yaiza’s pretty central plaza, and this whitewashed 18th-century church features a lovely blue, white and gold altarpiece and a folkloric painted wooden ceiling. We have been fortunate enough to have attended a number of concerts there when some of Dee´s Spanish friends, from her Yoga group, have sung with Coro de Yaiza.
This church was founded in 1699 as a hermitage. Only on 1728 was the final church constructed as it is nowadays.

It’s formed by two unequal naves, two side chapels and two facilities located by both sides of the major altar. The church has two accesses, a frontal and a side one both framed in stone. Nowadays, its original moorish architecture still remains. Its belfry has two bells located on the right side of the major facade.

In its interior you might find many valuable items as the main altarpiece and the two lateral pictures, the most important, about Nuestra Señora del Rosario that dates back to the XVIII century.

Our Lady of Good Remedy is often depicted as the Virgin Mary handing a bag of money to St. John of Matha. When in need – for whatever reason, but especially where you have had difficulty obtaining help, the advice seems to be to invoke the aid of Our Lady of Good Remedy, and you will surely experience the power of her intercession.

It is quite fascinating to see families indigenous to Lanzarote paying courteous attention to their politicians and priests and dignitaries, and then, when the music begins again, to fully participate with abandon.
And so, the music began again. At times sounding like Fishermen´s Friends on Padstow Harbour and at others like the Halle Choir in Manchester Cathedral, Los Gofiones gave us songs of the sun, sea and sand. They sang working songs of what the late Nanci Griffith might have called Trouble In The Fields. The accompaniment was of strings, percussion and woodwind, and often of that incredible hand-clapping rhythm section. In fact one of the most fascinating points of the evening was watching a young couple with a daughter of maybe six or seven. sitting nearby. Mum was teaching the daughter all the intricacies of the clapping techniques. Mum was also making air-timple shapes and singing along with every word of every song.

Whether we were being served keening songs from guest artists, or dance offerings from the entire ensemble the timple seemed ever-present and it is a sound I love. Tonight it seemed to tip toe quietly down the streets but somehow was never silenced, even by the deep roaring vocal sounds whenever the choir sang as one. The ninety minutes or so was a party, albeit a party at which everyone was friendly and respectful.

Was it sacred music? Was it folk-lore? Was it pop?

The classification should, perhaps, be Simply Perfect.