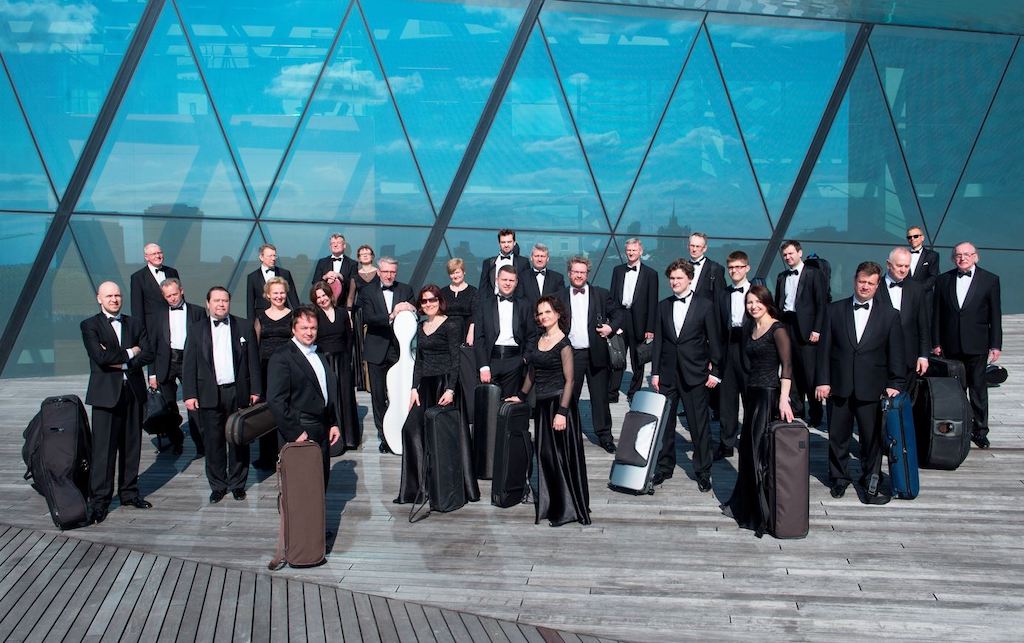 It has felt strange to be following the opening Lanzarote concerts of such a major event as the 38th Festival Internacional de Music de Canarias at a time when our pandemic figures were rising sharply during our period in level three precautions, especially when other Canary Islands were being forced to take even more stringent measures. It remains to be seen how the orchestras, conductors, players, vocalists and dancers of so many different acts will be able to deliver the whole quite complicated lists of tours dates around the islands over the next few weeks. The Lithuanian Chamber Orchestra (LCO) gave us the third great concert in a week, following an impressive Manuel Gomez Ruiz lending his rich tenor vocals to Trio Arbos and the compelling and intriguing work of PielConPiel (Skin With Skin), both of which have already been reviewed on these pages. So come follow your the way from the 20th century to 18th century with The Lithuanian Chamber Orchestra.

With more than 60 years of history, the Lithuanian Chamber Orchestra (LCO) is one of the most prominent and internationally acclaimed ensembles in its country. Since 2008, the virtuoso violinist Sergej Krylov has been its musical and artistic director. Krylov is one of the most recognized performers today thanks to his effervescent musicality, intense lyricism and tonal beauty. Together with the LCO, he usually takes on the role of soloist and conductor simultaneously, with a wide repertoire that ranges from Baroque to current music. And this is reflected in the program brought by the 38th FIMC, with works by Vasks, Rota and Sarasate. – Program. P. Vasks: Distant Light N. Rota: Concerto for bows P. Sarasate: Introduction and Tarantela Aires Gitanos.

Founded in 1960 by Professor Saulius Sondeckis, the Lithuanian Chamber Orchestra (LCO) is in its sixtieth season. The LCO is one of the most prominent and acclaimed Lithuanian teams in the world. Since 2008, the renowned violin virtuoso Sergej Krylov has been its musical and artistic director.

Over the years the Orchestra, an ambassador of Lithuanian music, has toured throughout Europe, America, the Republic of South Africa, Japan, China and Australia. The LCO has been presented at the Berlin Philharmonic, Musikverein in Vienna, Royal Festival Hall in London, Santa Cecilia in Rome, Concertgebouw in Amsterdam, Gewandhaus in Leipzig, Salle Pleyel and Salle Gaveau in Paris and many more. LCO has collaborated with Mstislav Rostropovich, Gidon Kremer, Yuri Bashmet, David Geringas, and many other notable musicians. The great musician and humanist Lord Yehudi Menuhin left a deep mark on the biography of the Orchestra.

The LCO has recorded more than 100 vinyls and CDs with a very diverse repertoire. In 2016, Deutsche Grammophon released the Lithuanian ensemble’s first CD with the LCO and Sergej Krylov including Antonio Vivaldi’s Four Seasons, as well as Concerti No. 8 and No. 9 for violin and strings. With this CD, the LCO became the first Lithuanian ensemble to enter the elite of world classical music.

A now traditional part of our own classical-concert-following are the early evening restaurant pre-concert meals that see us talking about how much we are looking forward to what we are about to hear, and then long discussions my wife and I hold in the car on the way home about what we have heard, how it was played and how it made us feel. Invariably these discussions are positive and this year, with our friends Iain and Margaret joining us, there are four of us to create a kind of X Factor panel for classical music.

During our meal at The Davinia Restaurant on the waterfront we were charmed by a gentle guitar and vocal duo (perhaps mother and daughter, we thought) who perched on the wall outside and enchanted diners with a busking of gentle vocals and guitar. It was all quite lovely, against a sunset sky, as we listened to the couple whilst being served by a young waiter in a sparkly t shirt who waltzed to our table with the food, after hearing we were on the way to a concierto !

´Short-cut Iain´, as we call him, then drove us through a mile or so of side streets to park right outside the theatre on the football ground car park across the road. There was already quite a lengthy queue, but because everyone there had to be in possession of pre-booked tickets and vaccination certificates, everyone entered quickly and smoothly and checked by the front of house theatre staff, and representatives of the ticket agency. We were all seated in segregated seats in a reduced capacity hall by the time  the orchestra came to the stage.

The opening piece was to be a major talking point between us all on the journey home. There was no doubting the quality of playing by violinist  Sergei Krylov, nor the support play of the orchestra. None of the four of us were expert enough to judge the quality of the piece. We wondered all the way home whether such modern 20th century music will endure for hundreds of years as have so many masterpieces. Was our reception to the work affected by our unfamiliarity with the piece? It had the ebb and flow and the fullness of the kind of classical music we know and love, but will our great grand-children be listening to it played by new orchestras? I´m sure its composer, Peteris Vasks, born in 1946 intended the work for the light years of travel we so often speak of on these pages.

photo 2 Vasks was born in Aizpute, Latvia, into the family of a Baptist pastor. He trained as a violinist at the Jāzeps Vītols Latvian Academy of Music, as a double-bass player with Vitautas Sereikaan at the Lithuanian Academy of Music and Theatre, and played in several Latvian orchestras before entering the State Conservatory in Vilnius in the neighboring Lithuania to study composition with Valentin Utkin, as he was prevented from doing this in Latvia due to Soviet repressive policy toward Baptists. He started to become known outside Latvia in the 1990s, when Gidon Kremer started championing his works and now is one of the most influential and praised European contemporary composers.

Vasks’ early style owed much to the aleatoric experiments of Witold Lutosławski, Krzysztof Penderecki and George Crumb. Later works included elements of Latvian folk music, such as his gentle and pastoral cor anglais concerto (1989). His works are generally extremely clear and communicative, with a solid and muscular sense of harmony. Lyrical passages may be followed by agitated dissonances, or interrupted by sombre sections with a march-like feel. He made extensive use of minimalist techniques as well, but never became attached to any particular method.

Vasks feels strongly about environmental issues, and a sense of nature both pristine and destroyed can be found in many of his works, such as the String Quartet No. 2 (1984). Other important works include Cantabile (1979) and Musica dolorosa (1984) and “Bass Trip” (2003) for solo double bass. He has written six string quartets, the fourth (1999) and fifth (2004) of which were written for the Kronos Quartet.

Vasks was the recipient of the Vienna Herder Prize of the Alfred Toepfer Foundation in 1996, as well as the Baltic Assembly Prize for Literature, the Arts and Science, and the Latvian Grand Music Award in 1997, the latter for his violin concerto Tālā Gaisma (“Distant Light”) (1996-7). He received the Cannes Classical Awards in 2004. His important works also include “Viatore”, Symphony No. 2 and “Music for a deceased Friend”.

Since 1994 he has been an honorary member of the Latvian Academy of Sciences and in 2001 he became a member of the Royal Swedish Academy of Music. In 1996 he was the main composer at the Stockholm New Music Festival and in 2006 composer-in-residence at the Presteigne Festival of Music and the Arts and the Vale of Glamorgan Festival in Wales.

In 2005 he received the Estonian honour the Order of the White Star, 3rd Class.

The second offering of this evening, Concoerto Para Arcos, was another twentieth century piece, composed by Nino Rota. If the selection by Vasks had seemed slightly long, this work by Rota seemed briefer and with a more familiar sounding beauty, full of riffs and flights of fancy that typify classical music. Even in this work it was easy to hear echos of the cinematic tomes of the musc he was famous for.

Giovanni Rota Rinaldi (1911 – 10 1979), was better known as Nino Rota, was an Italian composer, pianist, conductor and academic who became best known for his film scores, notably for the films of Federico Fellini and Luchino Visconti.

Pablo Sarasate, another composer from the twentieth centry, had written the introduction to Tarantella and aire gitanos in the same era.

Again, the twenty one piece LCO played this with great aplomb and during our in-car review on the way home, I think we all agreed this had been our most enjoyable part of the evening. The orchestra passed muster not only as players, for as Iain noted from his parade inspection from seats near the front, all member were wearing pristine black and bright patent leather shows,

Margaret tends to note those players who keep their gaze on the music sheets in front of them and which gaze out into the audience, and those who for some reason seem to stare at the floor while playing. Perhaps those patent leather shoes offer ea flattering reflection.

There were a number of well-deserved encores and standing ovations for the Lithuanian Chamber Orchestra who had look into the future of classical music, and when I come back to visit earth in the Year 3,000 (in the fashion of the Busted boy band !) I am sure I will hear this music again as a well accepted part of a much beloved classical tradition.