Clap Your Hands For Sing Alongs 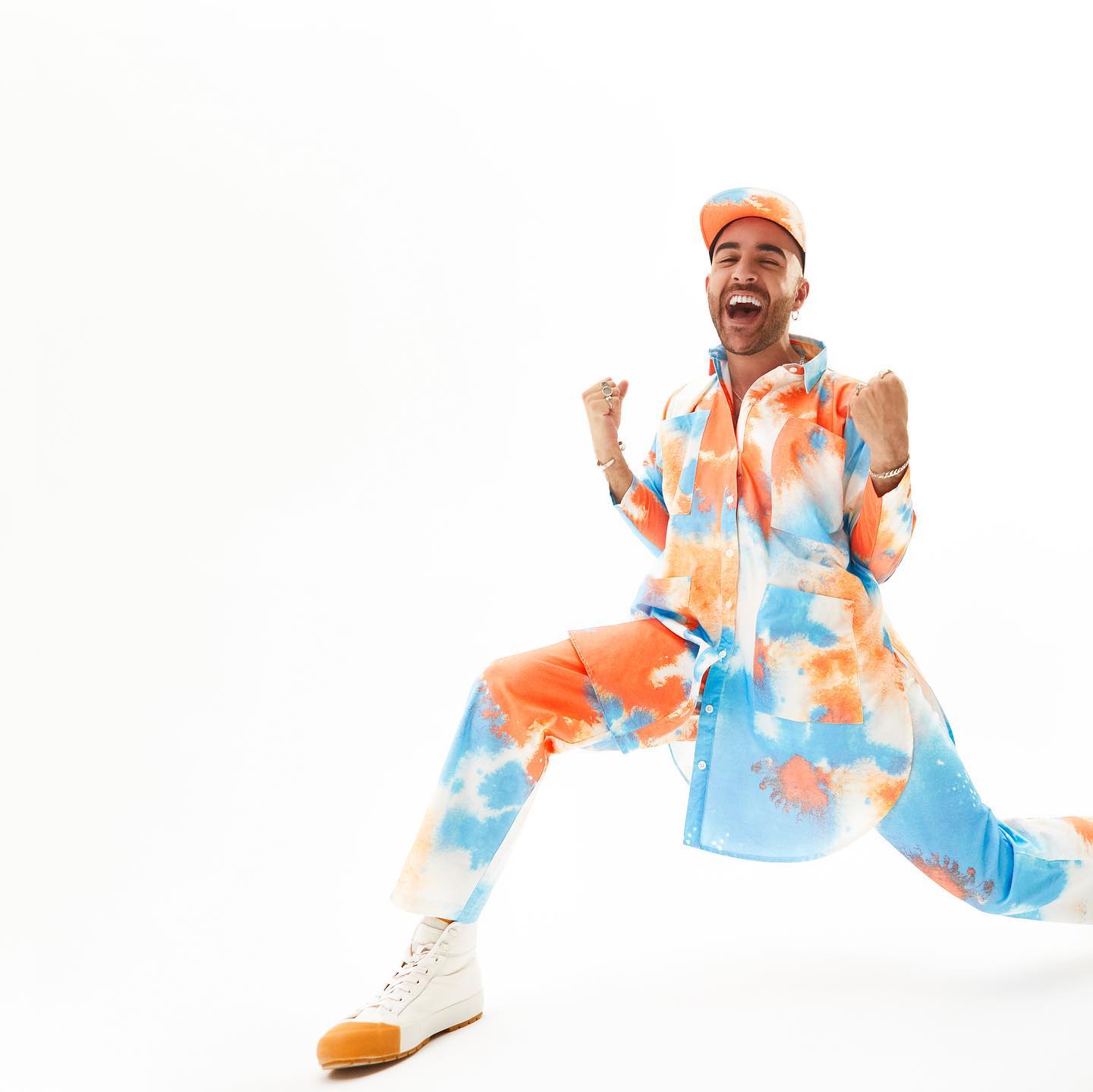 On a night when the world was just beginning to panic about the mutant strains from, allegedly, South Africa, it felt strange, and mildly discomforting to find ourselves in the closest-to-capacity theatre audience we had been in for a couple of years. Here on Lanzarote, we of course still attend theatre and music events fully masked and go through various protocols before we can actually be given entry, but it does feel as if the theatres and revised covid regulations are admitting slightly more people with every event. Whatever slight reservations we might have about that evaporated into thin air as an artist who has an album currently at number 2 in the Spanish charts took to the stage. For the next ninety minute we were stunned by how the ´kids´ in the audience clapped and sang along with the band. It was like pop concerts used to be, before they became stadium rock !

Spanish singer/songwriter Nil Moliner first made a name for himself as a member of pop/rock outfit CyBee before going solo and delivering his debut album, Bailando en la Batalla, in 2020. The Barcelona-born Moliner started his music career in 2008 at the age of 15, joining the Catalan pop outfit CyBee.

Nil Moliner (Barcelona, ​​1992) is a musician and composer. With his debut album “Bailando en la Batalla” he has reached # 2 on the official album sales list in Spain and # 1 as a Spanish artist in his week of release. His single “Soldadito de Hierro” has ranked in the Top 10 for music on Instagram and has won the Double Platinum Disc certificate in Spain. Nil Moliner already has another Platinum Record for “Mi Religión” and four Gold Records for “El Despertar”, “Esperando”, “Hijos de la Tierra” and “Sin Tu Piel”.

His last tour in 2019, of more than 40 dates throughout Spain, sold out at most venues, including the Joy Eslava room in Madrid and Barts in Barcelona, ​​both sold out. In 2020 he won the award for Revelation Artist by Los40 Music Awards, an award that confirms the promising future of Nil Moliner with upcoming musical novelties. With his new Zero tour, he has already sold more than 15,000 tickets and tours the main cities of Spain.

Nil Moliner began his musical career in 2005 , as a singer and guitarist for the Catalan pop-rock band CyBee , with which he recorded two albums produced by Manu Guix and Roger Rodés .

In 2008 , when he was only 15 years old, he began to play versions of other artists (such as Pereza , Fito & Fitipaldis , Dani Martín or M-Clan ) in bars and venues throughout the country, in addition to uploading these covers to YouTube , which They were so successful that other artists or composers of the stature of La Pegatina or Rosana collaborated in them .

In 2013 he released his first solo single , Sale el sol , of which he also made his first video clip . At this time, he also began to combine his musical career with composition and recording work in his own studio: MuuEstudio .

Once his cover tour was over, in early 2017 he began recording his first EP produced, again, by Manu Guix and Roger Rodés at Medusa Estudio . This EP – which is called Hijos de la Tierra – is made up of four songs composed by Nil Moliner himself that transport us to the optimism and happiness that he himself usually transmits. After becoming a little more known thanks to Operación Triunfo , Nil Moliner released in the summer of 2018 a remodeled version of his first single, Sale El Sol, song about the optimism it took to cope with anxiety. A few months later, he released two new versions of some songs from his EP . In 2019 , the singer-songwriter released five singles , including The Awakening , Iron Soldier and My Religion , with millions of views on Spotify and YouTube . Another one of those singles is Maybe in collaboration with Rayden . Inspired by Proactiva Open Arms, they decide to cry out in favor of the people who cross the sea and try to denounce social injustices. During the summer of 2019, Nil receives the Gold Record in Spain for his song Iron Soldier . Moliner participates with La Pegatina in the new version of his song And it was published in September 2019. On October 22, the first Platinum Record in Nil Moliner’s career is announced, with his song Iron Soldier .

On February 21, 2020, the Catalan released his debut album Dancing In Battle , which reached the top 2 of best-selling albums in Spain .

Nil Moliner was selected (out of more than 200 candidates ) by the Operación Triunfo 2017 team and Gestmusic as one of the composers of the candidate songs to attend the 2018 Eurovision Song Contest , held on May 12 of the same year.  The theme chosen was Let The Lights Follow Us , which was composed to be performed by Alfred García , a contestant in said edition of the musical contest.  However, the song composed by Nil Moliner only obtained 3% of the votes at the Eurovision Song Contest of the program, being in second last position of the songs performed during the competition. Despite this, the song was a great success, accumulating millions of views on Spotify  and obtaining the gold-record certificate in August 2018. A year later, the Catalan was selected again as a composer to represent Spain at Eurovision 2019 , together with Javi Garabatto and María Pelae, presenting the song No One Is Saved, which was performed by Miki Núñezand Natalia Lacunza. This song was one of the most voted by the public, finishing third in the race to go to the festival.

Nil subsequently participated in the composition of five songs,  Celébrate , Eterno Verano , No One Is Saved,  Escriurem, as well as And Write  of the debut album of Miki Núñez ‘Amuza’, which reached # 1 in sales in Spain.

All of the above sounds pretty impressive but even that could not prepare us for the force-of-nature stage presence that is Nil Morriner. he and two of his three musicians (the fourth, the keyboard player, was on the shoulders of the drummer !?) walked on stage, shouted a hearty hola, stepped back and lit the blue-touch paper. Nil gave us rudiments of rock, presented a lot of pop playfulness, hit us with humour and even delivered somed heart break ballads. This was a four piece band who patently shared a mutual respect for each other as individuals. In fact it was almost a five piece band in some ways, as the keys player would occasionally ignore the board and pick up a stringed instrument instead. With a glorious guitar player in the group and a driving drummer, and Nil himself on vocals and guitar they created a terrific show. The sounds they made were amplified by a huge teenage-girl fan-base in the audience who seemed to know every word of every chorus and who swayed and clapped in rhythm and sang-along, even in occasional harmony. Nil held them, and their parents and grandparents in the palm of his hands, talking to them as friends and sharing jokes. We were beyond, by a decade at least, the age of the grandparents we noted !

Nil and his musicians gave a show, though, that is already filed and labelled clearly, so I never forget it, in my memory bank.

As a writer and player Nil writes a number of what I would have considered fairly standard two verse, chorus, bridge, chorus, verse chorus songs back in the sixties and I was slightly in mind of The Kinks and The Hollies. Like the Kinks, particularly, Nil and the band are capable of thrashing rock, (think You Really Got Me), beautiful balladry (think Days) and even music-hall sounds (think here of Autumn Almanac)

Like The Hollies. the band seemed able to pick a thrilling solo at will, or hear a chorus coming out of nowhere on the run and then belting it out and calling for a response from the audience. There were echoes here of Jennifer Eccles, Just One Look and Bus Stop and others of the brilliant songs The Hollies threw around like confetti more than half a century ago.

We have, according to the press at least, had a blues revival and folk revival in that time and Americana has taken country back to the times before it was a Western. We are, then, surely due for a great pop revival (actually its already happening, but the press don´t seem to have cottoned on to it yet). Nil Morriner could have a great part to play in pop´s resurrection but he could also do so much more.

He writes and subsequently delivers his own songs with great panache but his fellow players in the industry are already beginning to cover, a even re.-interpret, several of his songs. Nil, and his band, will surely consider film and tv scores, too. Lots of pop bands (think The Beatles) and musicians (think Graham Nash of The Hollies) produced their best work as they put their ´pop´ careers behind them. With the hard work and dedication they have shown over the past few years it could be that, notwithstanding the brilliance of last night´s concert, the best could be yet to come from these fine players.