César Celebrations – All Across The Arts 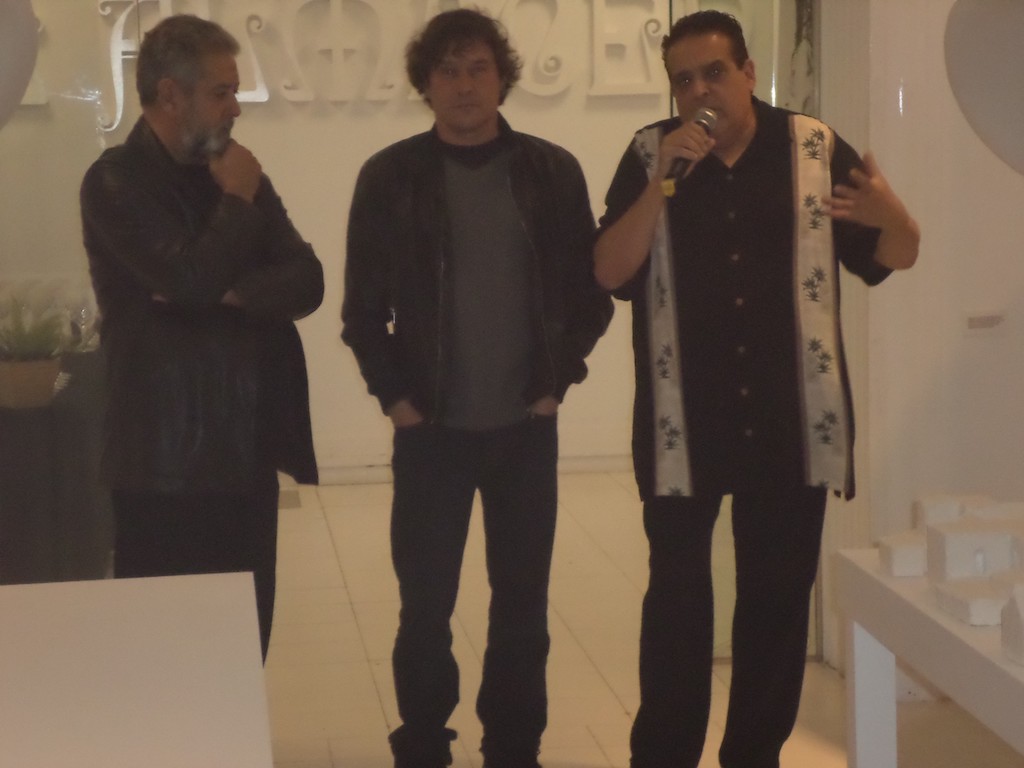 It was in 1974 that César Manrique and two or three other like-minded artists established The Centro Polidimensional El Almacen. Those artists shared a unique vision, innovative and unprecedented, that became the embryo of what is now a thriving arts and cultural scene on Lanzarote. This exhibition, titled Almacen 1974, illustrates what it meant to this site to become the platform on which local art would be standing even today, some forty five years later.

This retrospective, curated by Alejandro Krawietz, Mario Ferrer and Pepe Betancort, is part of the Manrique 100 initiative commemorating the century since the year of the artist’s birth and surely tens of thousands people living on the island, be they indigenous residents or newly arrived from other countries, are aware of César’s influence over so many affairs of Lanzarote and remain grateful for his vision and generosity of spirit. And here is where it all began, tucked away in an unprepossessing building that might have remained un-noticed to us as we wandered the narrow side streets of the centre of Arrecife one day, had we not been attracted by the buzz of chatter and laughter coming through its windows and doors.

We have remarked on the venue’s atmosphere many times in these pages saying of its light and airy dining area, that ´service was quick and friendly in the small restaurant area where every table was taken´

As for the gallery area we observed, ´what a perfect little art gallery Cic El Almacen really is. Maybe not so little, actually, as it seems to grow like Topsy and every step through a small door seems to open into a bigger room. The rooms here privilege their artists, and each time we visit we are struck by a sense of permanence. A recent exhibition by Raquel Plans felt as if it belonged here, somehow, and so too did other exhibitions simultaneously being shown around this wonderfully pretty and atmospheric artistic hideaway, masquerading as a bar.´

Our observation about the impression of permanence of the exhibitions here were reinforced again tonight, when we moved into the gallery following our tapas meal of goat kebab  and Canarian pork and then a shared platter of beef carpaccio followed by a carrot brownie and ice cream, accompanied by a beer and a glass of wine. Where Raquel Plans´ work had been exhibited, looking as if it had been and would be there forever, those same glistening white walls were now full of mementos, souvenirs, media coverage and new creations to celebrate Cic El Almacen and simultaneously launch the ´100 years: Lanzarote and César´ programme of events that will celebrate the hundredth anniversary of the year of his birth.

Around eighty people, a gathering, we guessed, of practicing artists and of those who appreciate their work, showed Lanzarote in all its finery as being smart but casual in dress and proud and attentive but not too reverential in manner, thus creating the relaxed, easy going feeling that always seems to accompany these events. They listened with obvious interest to lengthy introductory, welcoming and explanatory speeches by each of the three curating practitioners of this exhibition.

Pepe Betancort, as warm and engaging as always, gave the opening remarks and then introduced Mario Ferrer, who then handed over to Alejandro Krawietz, who reiterated, and slightly re-shaped, some points he had made in earlier press conferences.

“Lanzarote the island accompanied Manrique on his projects, in the same way that Manrique accompanied Lanzarote,” he suggested. It was this, he said, that constantly informed his subsequent methodology following his acceptance of the commission from the Cabildo to create an event, or series of events, to commemorate the centenary of the birth of César Manrique, the artist indelibly associated with Lanzarote.

Alejandro is the editor and director of cultural magazines and collections of art, poetry, history, and Spanish text. This all suggests that Alejandro Krawietz deserves the description he is often give as

´A Leonardo of letters and the arts,´ for he has often paused for closer examination of places in a world that might seem in too great a rush to overlook them. Alejandro, and fellow artist Juan Gopar, has devoted  more than a year to this exceptional exhibition, now showing at Cic El Almacen (The Warehouse. Arrecife, Lanzarote). The artists have put together an admirable programme of events that will demonstrate how far, and in what direction, Lanzarote has travelled under Manrique’s guidance.

Kraweitz was adamant on accepting the commission to collate ´100 Years: Lanzarote And César,´ that he would deliver a multi-disciplinary work. I, as a literary artist who once ran an organisation in the UK called ´all across the arts,´ wondered why he was so fierce in his determination to do so and who have been the artists who have helped achieve that.

´I think a decisive factor was more of an awareness of limits rather than of isolation,´ he mused. ´It is difficult to avoid thinking about the island as a system, i.e., a body in which the whole is much more than the sum of its parts : with even its exterior being a constructive force. Our exhibit, which aims to show the island – or better, to build an image of Lanzarote, one image among others possible-, incorporating in each of its parts and in each of its substratas, this idea of system.

The idea is exciting of working collectively within a project to achieve one larger sum rather than the mere counting of each plot. That is why we thought from the beginning that the image of the island should be informed, as is the island itself, by the contribution of many eyes, many hands and many different voices.´

This sounds to me very much like a confirmation of the theory that art does not, cannot, exist in isolation. Krawietz seemed to suggest that quite strongly, as he continued.

´So we take the Wallonia as an emblem of the exhibition. This spherical algae, which is somewhat akin to an island, even more, something like a planet, is a powerful natural filter that is due, for example, to the regeneration of the Charco de San Gines. Wallonia consists of a systemic body beautiful.´

Alejandro said that he and Juan Gopar, as curators of the project, wanted to create something very different, from many elements.

Even a cursory glance at the programme over the next several weeks provides evidence, in its lists of artists, art forms and venues, of their success in doing so. Even this exhibition opening here tonight is itself just one of several events showing concurrently in celebration elsewhere under that banner of ´100 Years: Lanzarote And César. These include live songs of the salinero and Melchor López texts, stories of the tail of the cyclone of Felix Ant with the chimneys of Luis Ibáñez of Lanzarote, and the boyfriends of the Cairn of Doña Dorotea with illustrations, too, by Mariola Acosta. Other artists like Agustín Espinosa and Manuel Padorno also take a deep and decisive look at the island. Indeed, it doesn´t stop even there, as Alejandro reminded us when he also named Pepe Damaso as playing an important role along with Fernando Higueras.

Alejandro spoke, too of a wide variety of other venues, saying ´we also have the Yellow House and the MIAC with the collaboration of the biosphere reserve,´ and he reminded us that there is also the work of botanists Marta Peña and Jaime Gil, of Fran Rodríguez Illustrator, artist Nuria Vidal, and historian Arminda Arteta,´ (who will feature in our article next week).

´We wanted to delve into the image of Lanzarote, created in the novel The Severo Sarduy, of birds from the beach,´ he tells us, of the book that transformed the island into a place of salvation, and the embodiment of healing from tragedy.´

´And the same can be said of the volcanic image of Alechinsky, of the beautiful strangeness of the first dives of Werner Herzog in Lanzarote, of the intense gloom of the poem ‘Island Journal’ of Fernando Gómez Aguilera, and of the light of the island captured in Gunther Uecker watercolors.´

In his head, Alejandro obviously hears ´art talking to art,´ a phrase also employed by freelance curator Estefania Quinteco when Lanzarote Information spoke to her recently about her own contribution to the arts and culture of the island. Alejandro spoke of so many art forms from which he had learned life skills and shaped his attitudes.

The whole exhibition programme seems to write a history of Lanzarote, telling of the richness of characters from throughout Europe and Africa who marked the island on their charts. 100 Years: Lanzarote and Cesar speaks of the endeavours made by  man to sustain life on a land ravaged by volcano and fire, and in their aftermath an apparent waste land, without water or roads.

´That history has to show that, following a hundred years of identifying itself through its arts and culture, Lanzarote now annually attracts three million tourists,´ Alejandro reminded us.

Lanzarote is in essence – and the work of Manrique came to offer an essential signaling of this idea – ´an empty space, bare territory, island of aridity.´

´In the way of conception of this exhibition,´ explained Arejando, ´we have tried to avoid dangers such as the encyclopedic temptation or the printing of a book at a wall. An exhibition should be, more than anything else, a building from the visual: a form inserted in the making of images.´

A catalogue to be presented in the autumn will incorporate at least another twenty voices that have agreed to offer their contribution in writing the essay which is built here.

´It was famously observed, in 1923, that there could be no reason for visitors to want to come to Lanzarote,´Alejandro pointed out, ´but the story will not end with the three million tourists who now come to the island each year. There are many intersecting stories between those two points. We have tried to make sense of them.´

Substantially, I think the curators and their fellow artists have shown that Lanzarote is a land in motion, alive and growing. Lanzarote, they suggest, is an island in a constant dissertation: an island that has created and destroyed and created again before the eyes of its inhabitants. Like the land itself, like Manrique before them, these artists have shown no fear of risk and no fear of getting lost.

When asked what other opportunities exist of having a completely different island,  Alejandro Kraweitz  replied, ´We have tried to look at Lanzarote, and we have tried to build something from what we were able to see. Nothing else. Nothing less.´

Speeches concluded, visitors were then invited into the exhibition rooms, to see interpretive but informative art work of all kinds, from small model villages to press clippings of rock and roll and popular culture that captured the energy that has brought the island to its current status. Strange, audio enhancing creations, in the shape of sea shells, hung from the ceiling and the whole gallery was a riot of colour. Visitors mingled with artists as conversation, generated by a shared love of the art works on display, flowed easily. The people, politicians and the practitioners seemed much more at ease in each other´s company than had ever seemed the case with their British counterparts when we lived in the UK. Cabildo President Pedro San Gines chatted to all the artists, Oscar Sanchez, representative on Arts And Culture, showed his constant enthusiasm for art in all its forms, and there, on the walls, on the tables, on the floor and hanging from the ceiling was the art, speaking for itself.