Ángaro, the new show at the Jameos del Agua 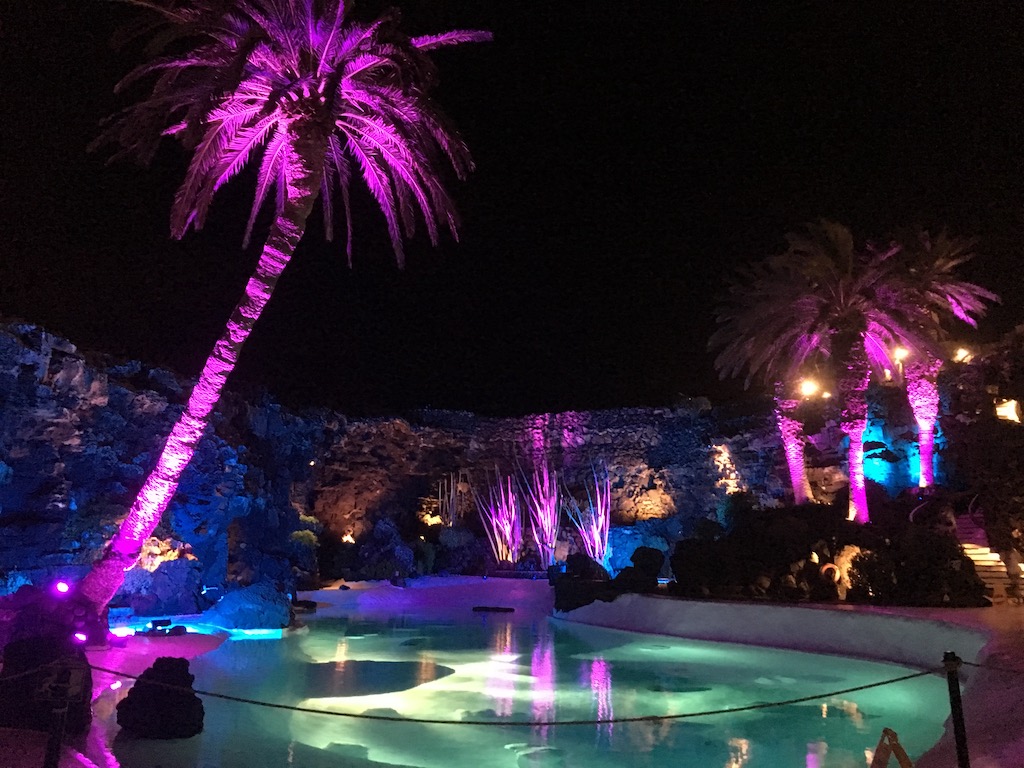 We attended the premiere of the show and thoroughly enjoyed it. It starts quite slowly and builds to a crescendo. Much of the music is percussion based, and there are some fascinating “instruments” used. The drummers are accompanied throughout by a pianist and bass player, who switched between a double bass and a bass guitar. In several songs, they were accompanied by a brilliant violinist and a superb cornet player, who switched to the French horn for two songs. The two female vocalists were excellent, and we were even treated to some of La Gomera’s “whistling” language.

The story is relatively easy to follow and it depicts the time when Canarians were under threat from pirates coming to the islands, and the hardships they endured.

The show was very well performed and as always at Jameos del Agua, the acoustics and atmosphere were stunning, and the lighting was simply amazing, making great use of the natural darkness of the cave.

We would highly recommend Ángaro to you – it lasts about an hour and a half – and you can either enjoy the special meal available afterwards or do as we did and head up the road to Órzola to enjoy a fresh fish lunch.

The premier of Ángaro was held on Sunday 29th October 2017 at 12:30, in the auditorium at the spectacular location of the Jameos del Agua in the North of Lanzarote.

Due to the continued success and public demand, the Ángaro show has been extended with new dates in April, May, June and July. All the performances will be held at 12:30, apart from Friday 13th July which is at 20:00.

Ángaro is an ancient Greek word for the fire signal that when lit, gave locals advance warning of an enemy ship approaching. The show Ángaro is an original performance, created by the company Pieles and based on the ethnographic heritage of the Canary Islands.

Tickets are priced from €29 – €34 for adults and €14.50 – €17 for children aged 7-12 years old, they can be purchased online. The higher price is to sit on the first 6 rows at the front of the auditorium, the lower price is general seating.

This show, directed by Jonatan Rodríguez, beat the competition from 18 proposals in the music, dance and theatre category for the autumn/winter season at CACT. The 4 elements of earth, water, fire and air are used to create music. Pianos, violins and French horns blend with powerful drums and other instruments, such as conches and shepherd’s flutes, and experiment with dances and voices from ancestral times.

A special menu will be served in the restaurant at the Jameos del Agua at the end of the show, priced at €24 per person and includes:

A sweet appetiser made from Gofio with fresh cheese with banana, palm honey and toasted almond roast

Main course: A choice between salmon loin macerated in soy with sautéed spinach, raisins & pine nuts with a light cream of avocado and lime, or sirloin steak glazed with blueberries, rosemary and garlic with candied boletus

The Jameos del Agua is best accessed by car, it is situated on the LZ-1 coast road between Arrieta and Orzola in the North of Lanzarote.

The number 09 bus from Arrecife does stop at the Jameos del Agua, on a Sunday it departs from the bus station at 10:15 and returns from Órzola at 16:40 or 18:10. For more information please visit the Intercitybus Lanzarote website.

Unfortunately this attraction is currently not suitable for visitors with limited mobility.

For the perfect Sunday in Lanzarote, we would suggest visiting the Sunday Teguise Market in the morning, driving over the top to descend through Haría. Watch the Ángaro show, followed by lunch either at the Jameos del Agua, or at one of several restaurants in the nearby village of Arrieta, before chilling on the beach at Playa La Garita.

Playa Blanca
21
From £425 per week
Get our newsletter!