All Across The Arts Home And Away 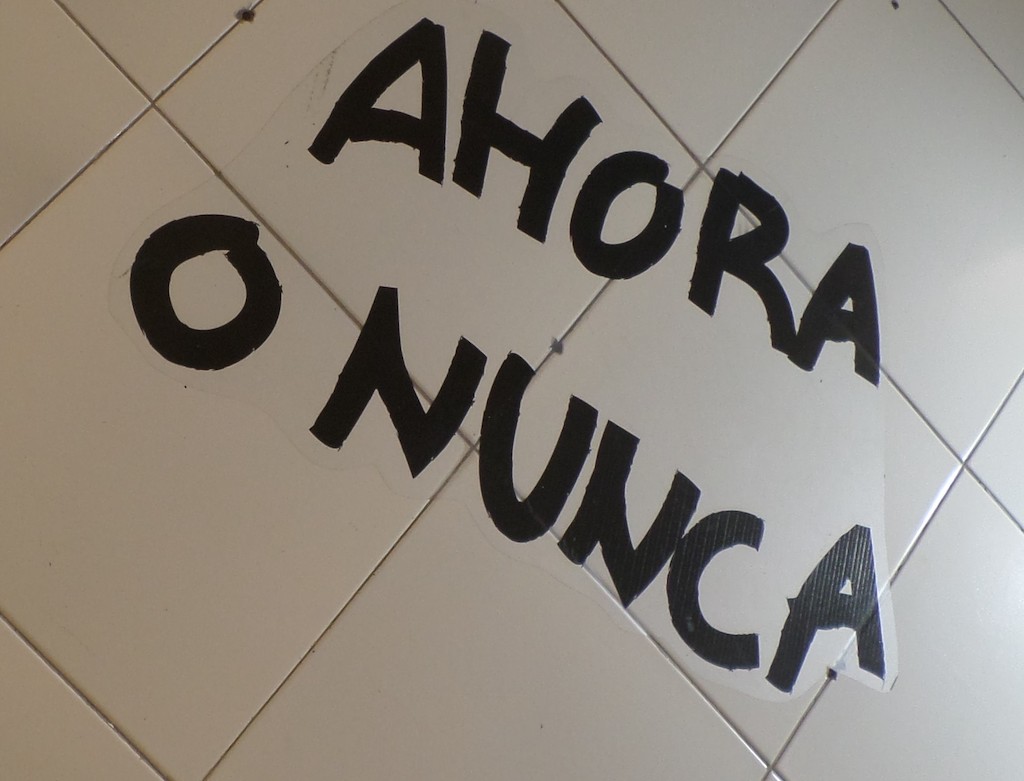 Although this exhibition had been running for several weeks, we waited until only a few days before its scheduled closure of 23rd March before taking a look. This was because we had learned that the artist being celebrated, Raquel Plans, was to give a talk about the collection on March 14th, and so we recognised there would be no better opportunity to not only view her assorted art work but also to learn more about the creative processes of an artist we already understood to be a multi-media practitioner.

The talk about her work, being exhibited in the downstairs gallery in Cic El Almacen, was delivered in an ante-room in which more than fifty people were already waiting expectantly when Raquel and her ´interviewer´ stepped to the two easy chairs placed at the front. Although, (and I have apologised for this many times on these pages), I cannot understand a word of Spanish conversation and my wife Dee can only, at best, paraphrase certain passages into English, it was immediately apparent how at ease together were the artist and questioner. So, too, both were at ease with the audience as conversation flowed freely around the room, seemingly about Raquel’s arrival at ´Falls´ as a subject around which to collate new work and about what processes she then took to put together the exhibition.

I’m often asked why I attend events conducted in Spanish when I am unable to accurately report them back to readers of these ´all across the arts´ reports.

Actually, listening but not understanding can sometimes feel a lot like some of the emotions identified in this exhibition about Falls. As if falling over the edge of a cliff, I feel myself hurtling out of control, unsure of where I might land and how badly I might be hurt. On the way down I have to keep reassuring myself that things will be ok, and that I will end up alive and well and writing my article.

To remind myself of that during my rapid descent into uncertainty I constantly utter reassuring and life affirming aphorisms like, Ahora o Nunca (Now or Never), Yes You Can and Never Stop Dreaming. Throughout this period, that feels so like falling, I figuratively throw out my arms to try to grab hold of any life-line I can and so in the process of hearing a talk in words I don’t understand I have to rely on reading body language and facial expressions and I have to metaphorically take the temperature of the room.

The temperature here was healthy and warm, Raquel and her interviewee constantly making eye contact with audience members and smiling, and receiving similar responses in return. The audience question and answer session at the end of the talk seemed spontaneous and enjoyable, and the two main speakers were given a well-deserved round of applause. We were then each given a copy of an untitled but beautifully presented, ´book of the exhibition´ to browse for the few minutes before we would be invited into the adjoining gallery to view the exhibition itself.

We took the opportunity to grab a very quick chat with the young artist, casually dressed in jeans and a jumper and seemingly quite happy to speak, (in English too) about her art. Having decided on Falls as a topic for exhibition, I asked her, did she then seek to explore that notion or does she prefer her work to explain that notion to her audience. She spoke of how she always wants to explore a topic through her work allowing the art to examine some of her existing attitudes and to perhaps shape some new ones.

´I like to learn more about myself through my art, ´ she smiled.

I had sensed in her talk that she is an artist who looks closely into those topics she decides to explore, and so I wondered if she regards her end product as a new baby, to be protected at all costs, or whether she prefers to push it out into the world to make its own way. She used her arms to make a motion suggesting opening the door for it to leave and told Lanzarote Information  ´the art must go now, and make its own way. I have lots of things to do.´

Somehow that seemed to summarise an artistic restlessness and an endless curiosity for new projects. How would she feel, though, if an artist in an entirely different art form wanted to pick up this exhibition and interpret it in some completely new and different style?

´I think you’ll find the answer to that when we step into the gallery,´ she laughed, ´where you will meet my dancer.´

The doors then opened on to a beautiful gallery, with walls, floors and ceilings all painted in a dazzling pristine, snow-blind white. On the main floor were some of those aphorisms I mentioned earlier, daubed at vague points around what seemed to be a replica of a hop scotch board. All the drawings, text and illustrations were in bold, black paint and the various statuettes on top of seemingly randomly placed lecterns were all manufactured in black, perhaps metallic, material, whilst weaving around these pedestals was a length of glistening white rope.

Statuesque, in the middle of the floor, was a male figure, in the lotus position, dressed all in black, but the end of the rope, a life-line you might think, lay tantalisingly just beyond his reach. My thinking of the rope as a life-line, however, was soon called into question as a recorded piece of eerie music struck up and the body on the floor became an artist, interpreting free-fall and helplessness through the medium of contemporary dance. He wonderfully acted fear and terror and confusion, all emotions interpreted elsewhere in Raquel’s paintings, text, photography, line drawings and sculptures that were exhibited throughout the gallery and in the book we had all been given.

When the dancer finally made a grab for the rope I was relieved to think my own first thoughts of it being a life-line were to be confirmed, but instead he wrapped the rope tightly around himself and it became an instrument of his ´fall´, restricting him from finding anything to hold on to. Suddenly, the performance was over, leaving more than fifty people to wonder whether he had fallen and died or whether he had survived. To me, anyway, Raquel’s work, and this danced analogy of it, had not explained anything, but had surely encouraged all witnessing  it to question their own notions of falling and what how those notions affect them, both emotionally and physically.

There are many parts to this exhibition and although tonight’s talk was a stand-alone event it, too, added to the exploration the exhibition was undertaking into the idea of ´falls´ and what they mean to us in relation to the loneliness, disillusionment, demotivation, anguish, fear, uncertainty and isolation we might feel as we ´fall´ off balance.

There were upstairs galleries around the room, and these contained not only more art work to examine, but a view from on high of the centre of the floor where the dance had been performed. The height of these passage ways added to the notion of falling but those ideas were turned upside down in mid-air by the fact that our view of the floor seemed to offer ground-level safety. Somehow Raquel’s work seemed almost to have turned us head over heels, a phrase we usually employ to explain the feeling of falling in love, which is surely a very different feeling from falling from a top floor landing onto a hard-wood floor. Or is it? I guess I’ll be musing over this exhibition for some weeks to come. Look out for the name of Raquel Plans, she’ll make you think!

Raquel will, I hope, be thinking back on the success of the exhibition and will surely recognise what a perfect little art gallery Cic El Almacen really is. Maybe not so little, actually, as it seems to grow like Topsy and every step through a small door seems to open into a bigger room.

I can recall many galleries I have been in that seem somehow to physically dwarf exhibiting artists and their art  in a way that serves to remind visitors that these works and their creators are only here temporarily. Cic El Almacen, though, privileges its artists, and every time I visit an exhibition here I am struck by a sense of permanence. Raquel’s collection felt as if it belonged here, somehow, and so too did other exhibitions simultaneously being shown around this wonderfully pretty and atmospheric artistic hideaway, masquerading as a bar.

I ought to say, though, that this venue works pretty well as a tapas bar too, with a pristine drinking and dining area, young energetic and polite staff  and, as if beer, wine, tapas and art isn’t enough, they leave a few arts related books around as well, for you to read over your drink. There’s an upstairs little theatre too where, poetry reading, talks and concerts are held, to which we would be heading the following night to hear our first taste of Fado music.

So, thanks to all concerned for what was a thought-provoking exhibition and event very professionally delivered (for free) in a lovely setting and in a friendly and safe atmosphere.

Elsewhere, on the same evening, other Lanzarote artists were enjoying success in England! Two hundred and fifty people packed into Saint Paul’s Covent Garden of London to listen to a concert by Lanzarote Ensemble, (promoted by the Cabildo of Lanzarote), on March 14th. Lanzarote Ensemble, comprised mainly of musicians resident and/or trained on the island, managed to hang up the ´sold out´ sign for its first performance abroad.

Once more under the direction of the British director James Blair, their repertoire was composed of the Serenade No. 10 or “Gran Partita” by W. A. Mozart, and the “variations on las Folias”, a work of the director of the Orchestra, Ayoze Rodríguez, part of the “Folias of Spain” of the Renaissance and Baroque period to remind us of the folías canarias today.

As well as congratulating the musicians on this success, The Cabildo of Lanzarote have thanked the collaboration of the Instituto Cervantes in London and of the Iberian and Latin Music Society in organizing this event.

The President of the Cabildo de Lanzarote, Pedro San Ginés, present at the concert, hailed the success of this performance.

“We have to congratulate all the components of Lanzarote Ensemble, including Ayoze Rodríguez, for an extraordinary concert tonight, and for achieving great critical and public acclaim and a sold-out notice bearing the name of ´Lanzarote to London,´ he said.

The Minister Of Culture of the Cabildo of Lanzarote, Óscar Pérez, also wanted to “congratulate the musicians, the venue and the technical team of the Cabildo. Lanzarote Ensemble has already become a major reference point in the academic music of our island. The London debut of this Orchestra is a milestone that should be remembered in the future.”

Meanwhile, I need to finish this article now because its almost time to set off on our return to Cic El Almacen. We will bring you our thoughts on Fado music next week.