A World Of Music & A Woman’s Voice 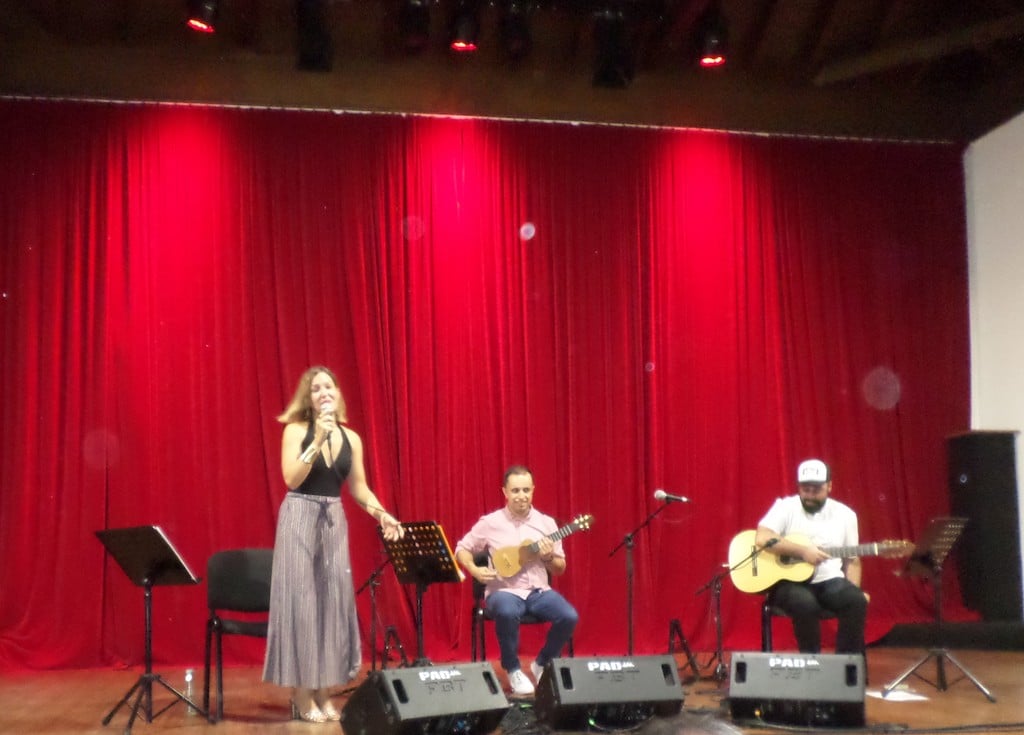 Since 2015, Claudia Alamo and Beselch Rodriguez have taken their Mujeres: de la Voz al Mundo, (Women; From Voice To The World) to stages all over the Canary Islands, performing an excellent range of songs in which singing and the timple lead the way. They put the spotlight on a wide and deep repertoire, singing some well-known tunes as well many lesser known.

Tonight they were playing as a trio with guitar player Marco del Castillo to deliver a new project combining ethnic styles with contemporary nuances.

All this was yet another in the scores of ´free until full´ concerts we have gratefully attended this year and it took us back to one of our favourite ´small venues,´ Casa Benito Pereze Armas, the house of culture in Yaiza. After a feast fit for royalty at what Lani’s call their ´snack bar´ down at the marina in Playa Blanca we paid the low no-frills bill to one of their friendly staff, and set off up to Yaiza with the sun setting behind us as we arrived there at about 8.15pm for a nine o’clock start. A quick scan of the courtyard showed only a small crowd had gathered by this time, and so we sat in the car, from where we would be able to see the doors open. Fifteen minutes later a car pulled into the space next to us and out stepped a couple of Dee’s colleagues from her yoga group. Almost simultaneously we noticed the small auditorium was now open so we went in with Marco and Carmen, and spent the last few minutes before the show admiring two huge, brooding original Manrique works that hang on a sidewall and an impressive piece on the rear wall by Ildefonso Aguiller.

By the time the musicians stepped on to the stage there were around fifty people in the audience, including young parents with a baby in a pram and, on the front row, dressed in smart casual attire, and obviously not there in his usual capacity of official host of such shows was the man I have referenced in several reviews as the compere beyond compare.
In doing so I have often promised you I would find out his name for your reference. It was not, reader, an easy task. As I politely sat next to him and introduced myself it was immediately apparent that this gifted, witty and informative master of ceremonies knew as few words in English as I do in Spanish. Even asking his name meant I had to slowly and phonetically repeat a phrase Dee had given me, and in the end I simply held out my pen and paper and he printed his name on the page. It reads, I hope, as Francesco Jose Navano, a man we have seen host the Manrique concerts in Arrecife and the San Gines folklorica festival as well as hosts of smaller shows.

It became apparent during tonight’s gig, however, that he might well be more than ´just´ an introducer of acts. Here he was, not on stage, but in the audience, taking several photos on what looked to be an expensive professional camera, and being acknowledged by the musicians and being engaged with them in some seemingly serious conversation for the audience to listen in on and also in what the audience obviously found to be witty banter (in Spanish) between them. I suspect he also works, either professionally or as an expert amateur: historian or archivist of folk lore on the island.

The first note I scribbled on my pad in the dark was that the timple Beselch was playing seemed to be of a solid body, and later in the concert he engaged in a long conversation with Francesco Jose about that, before turning his instrument around in his hands to show that the instrument in fact had a hole cut into its base, rather than its top facia.

The concert opened with only Beselch and Carlos playing an instrumental number, all seemingly in open tuning, that gave us immediate promise of the delights to come. These were two instruments in perfect timing and rhythm with their players obviously each enjoying the work and explorations of the other as they set out together on this journey of discovery.

Out on to the stage for her own round of applause stepped Claudia Alamo, looking very contemporary and European as she joined the men for this celebration of old and new music. The two musicians played a prolonged jazzy, slightly sassy opening, but just as she began to sing the backing became somehow more percussive and yet at the same time slower and softer, creating a wonderful effect. Her range, both musically and emotionally, was illustrated immediately with the following number as she delivered a slower, but more impassioned piece. All this was done from a totally relaxed sitting position and she had the air of someone singing for the love of doing so, rather than with any sense of contrived performance. The intricacies between her vocals and the timple and guitar were complex and evident in her powerful vocal for the next song, before she surprisingly exited stage left, though there was no sign of a bear in pursuit.

It soon became apparent that she had vacated the stage so that the two male musicians could demonstrate their flair and sheer enjoyment of each other’s company. I’m not sure how many bars had been played before I was able to name that tune in a hundred and seven but there were so many variations on a theme delivered by both timple and guitar that that it was only when they finished teasing us and played the instantly recognisable riff, as it was written, that I could agree that this tune was, indeed, one of My Favourite Things. This was a wonderful, joyful, swinging version and had they performed it like this, then Julie Andrews and The Von Trapp girls might have turned the this sound of music from a lullaby into a riotous party.

There followed a lengthy, but judging by the laughter from the predominantly Spanish audience, hilarious monologue from Beselch. The only words I recognised in the whole piece were guagua (bus), and The Sound Music and it was obviously really funny. Nevertheless I guess you had to be there, and be able to understand the language. Still, that never puts us off. Laughter and enjoyment and audience participation are contagious and require no translation.

Claudia stepped back out on to the stage even as the audience were still offering prolonged applause to Beselch and Carlos for such a virtuoso performance. She gave us a hot, sunny day kind of song to a glissando of strings and in her introduction to the next song suggested it was of Mexican origin.

It certainly sounded to me like the kind of lullaby that Tish Hinojosa might have sung. Tish is a folksinger, in both Spanish and English, with a pride of place in my record collection. She sings traditional Mexican folk songs and her own original compositions, accompanying herself on guitar. The daughter of Mexican immigrants she is also influenced by Mexican folk, Tejano, Conjunto and country music. She sees her music as belonging to the US / Mexico border and has recorded primarily on the Rounder label.

Claudia gave this song, though, a strangely haunting chorus of the Irish too rye aye variety, in a gorgeous performance by the trio. Delivering on their promise to bring us voices from around the world, the three were then suddenly raising the tempo with music that had everyone on the audience tapping their feet even as Claudia sang a keening, almost Arabic sounding lament over the melody.

We moved back towards my favourite ´cowboy´ music with a lovely instrumental opening in the style of Marty Robins on his El Paso recordings. As Claudia took the vocals to a chorus, Dee and I nudged each other and mouthed the words Skye Boat Song. It wasn’t of course, but it was almost certainly a sea song as we could almost feel the gentle rise and fall of the tide in the music.

Once again Claudia then ceded the stage to her colleagues who took the opportunity to give us an impeccably finger-picked duet that held us spellbound before she returned out front to once again add her controlled, melodic vocals to this music. To what sounded like Canarian dance rhythms she earned bursts of applause and cries of bravo from the audience for delivery of well-loved vocal techniques.

The show also included some of those lengthy exchanges with our compere friend, and although we felt we were perhaps missing out on some kind of in-jokes it was obvious that the audience were hanging on every word and learning a good deal more about these talented young musicians who were giving such a stellar performance.

Encores are quite frequent over here, but are nevertheless hard earned, and tonight’s was massively deserved. Although it might have been the only word Carmen’s husband and I had in common he and I and our ladies all agreed the concert had been ´bueno.´

Sadly, though, there seemed to be no recordings on sale afterwards but a ride on your favourite search engine should lead you to You Tube snips and further information about all three of these excellent artists.