A Timple And The Index Finger 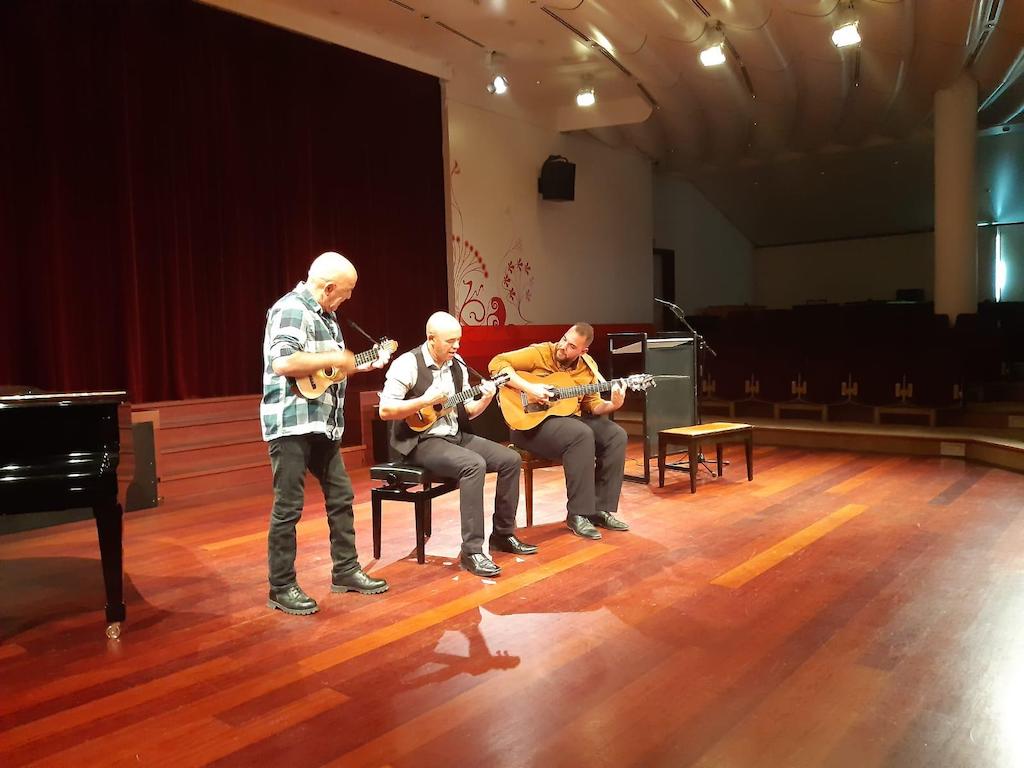 Listen to any Hugh Moffatt song and you will be reminded that music is about personalising the universal and making the universal personal. The American singer writer also reminded me in nearly every interview I conducted with him that we must intend what we write for light years of travel. That was a phrase that, when unpicked, had a million meanings: about communication, commodification and unification to name but a few. Hugh was also talking about how music travels around the world, blends into other genres and tongues and rhythms and how an instrument unique to one part of the world can make harmonies and create songs with an instrument indigenous to another place on the other side of the globe.

A specially created timple, the tiny stringed instrumental that is symbolic of the music of Lanzarote, is now displayed proudly at the Musical Instruments Museum of Brussels.

A timple is seldom too far away from any music heard here on the island, of course, as it makes a great solo sound as an instrument, whether played loudly and quickly or softly and slowly, and it can even hold its own amongst an orchestra of bigger and more sonorous musical pieces. It is usually described as a traditional five string instrument of The Canary Islands, though in many places such as La Palma and Tenerife some players omit the fifth string so that the instrument can be played like a four string ukulele. Traditionalists might claim that to be a relatively new development, even if those who play the so called ´new style´ could point out that the fifth string was only introduced as recently as the late nineteenth / early twentieth century.

The Cabildo de Lanzarote donated a copy of a five stringed instrument of Canarian folklore to the Belgian Cultural Centre, which until now has never held a timple in its collection. The Lanzaroteño luthier, Vicente Corujo, was specially commissioned to oversee the manufacturing the instrument.

The culture and music of Lanzarote will, from now on, have one foot permanently set in the European capital. Corujo’s creation has been donated by The Cabildo and will now become a permanent fixture of The Musical Instruments Museum Of Brussels. (MIM).

The Councillor of Culture of the Cabildo de Lanzarote, Alberto Aguiar, led a small delegation to deliver the timple at the MIM, at an event held recently at the museum headquarters in Brussels. The official presentation also featured a performance by musicians Alexis Lemes, Adrián Niz and Antonio Jorge Toledo.

I have been fortunate to see Alexis in concert a number of times, often with Javier Infante and sometimes with his own timple fusion trio where he takes the instrument into uncharted musical waters that perhaps no maker of the instrument would ever expect it to appear. Adrian Niz is similarly adventurous and can also be seen regularly playing on Lanzarote, whilst Antonio is from La Graciosa, but like the other two players has a wide You Tube presence that would reward your viewing.

At the award ceremony, which was attended by nearly half a hundred people, the Vice-Counsel for Culture and Heritage of the Government of the Canary Islands, was also present.

Accepting the timple on behalf of the MIM was Anne E. Ceulemans, director of the string instruments section. Ceulemans thanked the Cabildo de Lanzarote for this donation, saying ´we very impressed by the high quality of the instrument.´

For his part, Alberto Aguiar stated that the delegation was honouring a commitment made by the previous corporation of the Cabildo, and the handing over to MIM of the timple, specially crafted on Lanzarote, was a fulfilment of that promise.

´The original proposal,´ the director continued, “was from the Lanzarote born Antonio Jorge Toledo, who has long resided in Brussels and realised that there were no timples in the collection of the Musical Instruments Museum of Brussels.´´

My own son lives in South Korea and is a hobbyist carpenter who produces all sorts of exquisite items out of wood. Much as he is also a music lover and instrumentalist I know he would first admire a timple, especially this one, for its exquisite aesthetic beauty. There will be those of you amongst our readers I am sure who, like Andrew, would be interested to know what renders it so exquisite.

The timple of Vicente Corujo is made of noble woods. The harmonic top is German pinoabeto; the bottom and hoops are rosewood from Madagascar; the arm is made of sipe wood, the ebony fingerboard of Cameroon; the bridge is of Morality of La Palma; the bones are camel and the frets are made of steel. All glues and varnishes are 100% natural and The string throw is 400 mm in length.

I have recently written a piece published on my blog about the diaspora of Spanish music around the world and how the timple has influenced and been influenced by other instruments To know that an instrument so emblematic of Lanzarote now stands proudly in a European museum is a wonderful reminder of how music travels and its power to unify. That this Lanzarote government has delivered on a pledge made by the one it replaced shows a dignity and a respect for our music and is, in itself, a unifying act.

There are plenty of other art forms to follow on Lanzarote, of course. For example A large audience gathered recently at the CIC El Almacén to attend the opening of the exhibition El Deto Index, the exhibition by the Lanzaroteño photographer Pepe Vera currently displayed ´the warehouse´, the cultural centre dependent on the Cabildo de Lanzarote.

Among the attendees were the artist himself and numerous family and friends, as well as students of the Pancho Lasso School of Art, in which Vera serves as a photography teacher. Also there were authorities such as the Culture Advisor of the island corporation, Alberto Aguiar, and the Minister of Commerce, Energy and Industry, Ariagona Gozález.
For people interested in learning more about ´The Index Finger´ and Pepe Vera himself, a guided tour, organised by The Cultural Department of The Cabildo, was led by the historian and art curator Estefanía Camejo. We have been fortunate enough to attend a couple of such ´tours´ facilitated by Estefania and have published an exclusive interview with her on these pages. It is worth keeping an eye out for any such events she leading. Her knowledge is vast and her enthusiasm is boundless.

The Index Finger is the photographer’s first solo exhibition in this space. According to Pepe Vera himself, ´the idea of this exhibition is part of the book by Alberto Ruiz Sánchez, also entitled ‘The Index Finger’, and his philosophy of sleepwalking. That idea of getting carried away on travel – because in the end they’re photos of trips and places I’ve been – and rather than going looking for something, going to hunt pictures, the idea is more like you’re meeting them. The Índex Finger, seeks to witness “unique, fortuitous and unrepeatable encounters”, according to the accompanying text written by Pepe Betancort in the brochure that complements the exhibition. Pepe, the exhibition coordinator of Culture Lanzarote, adds that “Lisbon, (and many Capital cities) are part of the scenarios of this visual geography of images ripped to their travels, to become moments captured forever.´ He then spoke of ´unexpected and fleeting images, suspended in a non-time, while life remains, inexorably. Pepe Vera’s camera, through his index finger, tries to touch what we don’t see, what is hidden and escapes with the naked eye, in an attempt to catch the fleetingness of a chance encounter or the surprise beauty of the invisible of that very moment.´