A Stage For All The World On Lanzarote 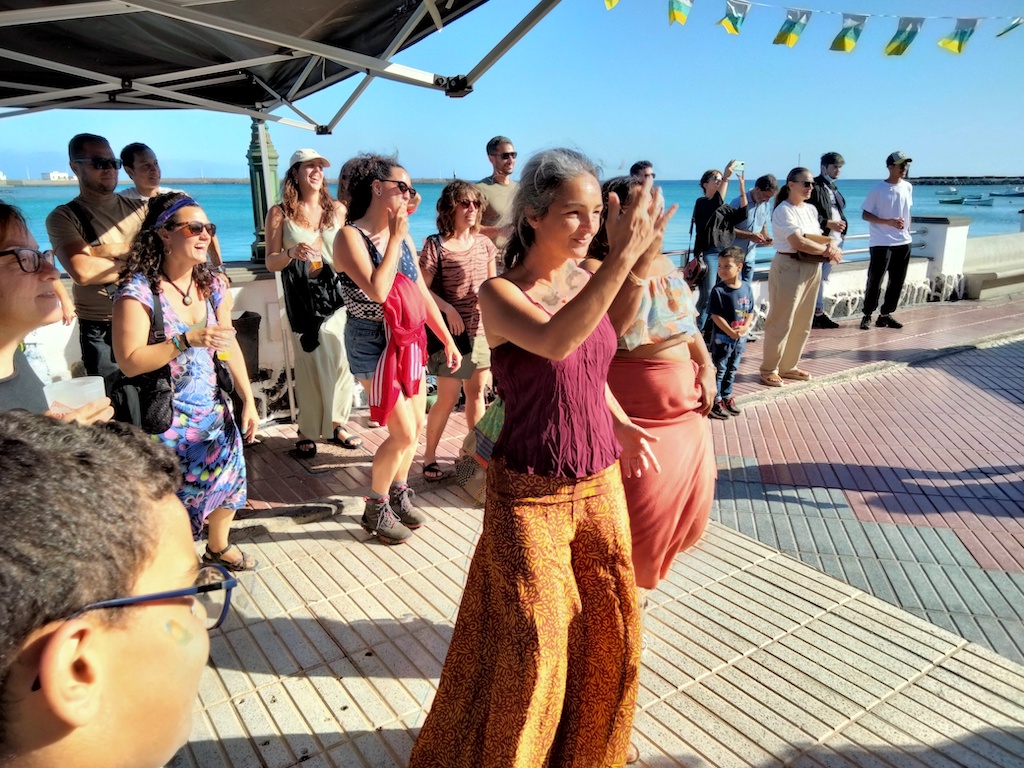 As I tried to follow Ironman (well, I was never going to be in the lead, was I ?) I set out in the car early in the morning, and took all the diversions, taking so many sidetracks and detours created so the course could remain traffic free,  that by half past eight I didn´t know whether I was on Lanzarote or in London.

I finally found a place to pull up over to the road shoulder on the ´camel roundabout´ to watch the world go by. And then the world parked next to me, and I was one of hundreds of vehicles lining the area as the cyclists, having enjoyed their early morning swim, rode past at great speed. They would later run for several miles, some competitively, others simply against the clock for their own satisfaction.

I would have liked to have been at the beginning and at the end, but it was all that bit in the middle, you know swimming, cycling and running, that I couldn´t do with.

Besides which, there was a music festival taking place all day in Arrecife, and as soon as the island opened its roads again, which was all handled promptly and professionally by police and stewards I´d be down the road in a cloud of smoke to hear the musicians play.

I never have and never could now, race in IronMan (the female section of which was won by a British girl, Lydia Dant,  by the way !).  However, I performed in a minor capacity with my song-writing partner, Colin Lever, as Lendanear,  at some  major UK folk festivals in the nineteen seventies although I have never wanted to become a fan who might wallow, hippopotumus like in the mud, mud, glorious mud of Glastonbury and I certainly wasn´t  one of Joni´s half a million strong who met up on the toad to Woodstock.

Once, when working as a reporter at a major American / British country music festival at a weekend in Nottingham several years later I mingled with 130,000 fans and managed to avoid hearing the score of a World Cup football final being played on the same day, and so arrived home in Manchester long after midnight to watch the video of the match from the comfort of the sofa. That would be my preferred way of watching a festival, too, I guess: from my settee, beer in hand.

If I had to choose a festival to watch live in the future, it would probably be the WOMAD  22 event to be held from 28th to 31st July at Charlton Park, Malmesbury UK.

For nearly 40 years, WOMAD has been one of the UK’s largest global music and culture festivals. with over 150 world-class musicians performing on six unique music stages over the long weekend. WOMAD also includes activities like the physics pavilion, the world of art, and talks by literary speakers.

At this long-established event, hosting authentic groups and artists playing music from all around the world, you can hear the musical tides created by migrant movements around the globe, throughout history

Leading acts at this year´s festival include Flaming Lips (an act I have featured on my daily sidetracks & detours blog), as well as Fantastic Negrito, Les Amazones DÁfrique and one of my very favourite artists, the wonderful Nitin Sawney as well as the much loved King Pleasure And The Biscuit Boys.

Tickets are still available at https://www.musicfestivalwizard.com/festivals/womad-festival-2022/ where you can also book flights and accommodation. I know that these pages on Lanzarote Information are widely read by British people who holiday here whilst living in the UK and by British residents now living here and we are sure The Womad (World of Music and Dance Festival) would be a fantastic experience for them all.

Nevertheless I can assure you that the festival I dashed over to catch in Arrecife after the IronMan event was also  a busy, bustling, beautiful experience of music from all over the world.

My wife Dee and I were, fortunate enough on Saturday 21st May 2022 to attend the Lanzarote version of this great Womad Festival. We were promised by press releases that we would find Multiculturalism, learning, fusion and lots of fun, if we attended  III Festival of the World´s Original Peoples in which the Cabildo de Lanzarote collaborates.

This event has been affected by the pause in the cultural world due to the pandemic and capacity restrictions.  The Festival remains, though, an important meeting point to foster the integration of the different communities that have made Lanzarote their home.

The World´s Indigenous Peoples Festival serves as a tool to make visible the situation of our peoples through learning and understanding their cultures.

We would be abo to identify 14 countries represented in The Federation Of Migrants  participating in the event, where artists from all  five continents expressed their culture,  giving us the opportunity to meet and enjoy them.

The Festival was attended by Lanzarote President Maria Dolores Carujo Berriel, who had also been in attendance at the Triathlon earlier in the day (it seems we each have busy diaries)   and was presented by Wassima Azzouz Zina, Daniel Vera Barrera and Juan Carlos Torres of Radio Nueva Moda, with the special collaboration of DJ Max Rim.

It began at 11.00 am in the beautiful shoreline park of , Jose Ramirez Cerda, in Arrecife, which unfortunately clashed with the Ironman triathlon event taking place in the centre of the island, that I also had a commission to report on.

Certainly, when we arrived at this musical extravaganza at 6.00 pm in the evening it was obviously delivering on its promises. It had by then settled itself as a gathering of ´smiley, happy people´!

People of all ages were gathered in throngs, dancing together regardless of age, gender or social status. We took a look around the food and drink and craft stalls and it was immediately apparent that this was a mutual celebration of migrant settlers and their gratitude for their Lanzarote home and of the gratitude of the Lanzarote government and people for the work and input to the country by its migrant settlers.

We moved deeper in to the festival-proper, as near to the stage as we could get. We had to take our photographs over the heads of  hundreds of  the  ´loyal friends and front-row dancers´, gathered at the front of the stage  The shots we took were of a Cuban band, of the Buena Vista Social Club integrity. Their version of Gauntanemera was not of the usual trilling tourist-friendly structure we are mostly familiar with, but instead reflected ´a love for the mountain stream rather than for the ocean´ and a determination to stand by the poor people of the world. As their act came to a close, we decided to catch a meal before the next band took to the stage.

I did the dad´s dance exiting the dance floor (as shown in a Peter Kay comedy sketch). whilst Dee strode on straight ahead to ensure we could get a a table at La Rustica, the lovely restaurant with its sea views, at the perimeter of the festival site.

Resplendent in national dress, they gave us a, percussion-led performance, full of panache, that saw happy but crowd-aware, conga lines snaking through the hundreds of people and tables and chairs.

The festival would go on for a while longer, at least until midnight, but for we seventy year olds it was already past our ten thirty bed time and reluctantly we concluded our day of Ironman and world music with a sixty minute drive through the streetlight and shade of night-time Lanzarote.

Even so, I didn´t get to bed until 1.30 a.m. because of the third round of the PGA golf major tournament,  as I wanted see Rory Mcllroy go storming on and Tiger Woods limping heroically along.

I watched it in the preferred method I described earlier: from the settee with a beer in hand,…except the beer was a cup of cocoa.

That´s the trouble with retirement: too few hours in the day, and too many miles on the clock !