A Different Reality These Days 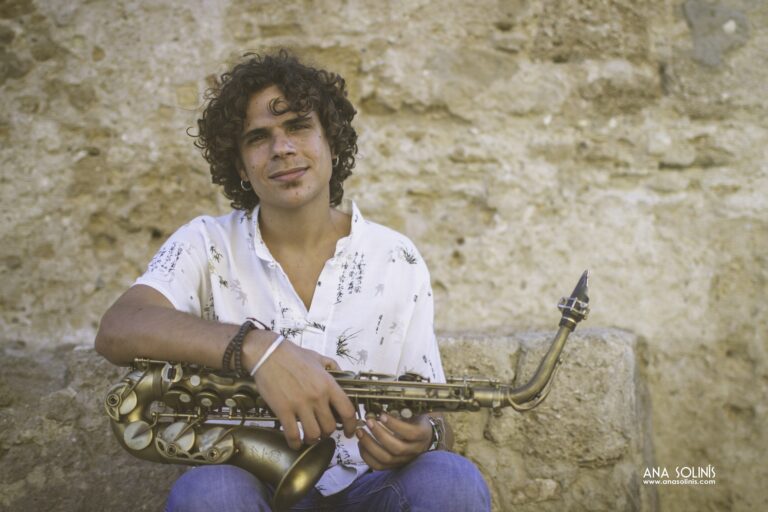 Antonio Lizana (San Fernando, Cádiz, 1983) is a saxophonist, singer and also the composer of all his music. In the last three years he has performed around three hundred concerts with his band in more than thirty countries, participating in festivals such as WOMEX, Etnosur, London, New York and San Francisco flamenco festivals, Barcelona Voll Damn, Shanghai Jazz Fest (China), Casablanca Jazz Fest (Morocco) and Flamenco Biennale (Holland). As concerts began to reappear, slowly, on our Lanzarote calendars we marked down this August date as soon as we learned that Antonio would be playing in a theatre near us.

Even more interesting, to me, than all the rest of his accomplishments, is the fact that Antonio has played at the South By South West Festival (SWXW) in Austin, Texas. that over the years has been a great platform for singer writers of the ´Americana´ music I so love. On my own Sidetracks & Detours blog site, recently, I reported on the massively-damaging-to-the-economy last minute cancellation, due to the pandemic, of this year´s event and the subsequent raising of half a million dollars through a Special Night For Austin Concert hosted by Willie Nelson and Paul Simon, and you can find those reports in our archives at South By South West Suffering.

Antonio Lizana has released four albums since his solo project started in 2012 and has been one of the few Spanish artists to record a concert in the famous NPR (North American public radio) project Tiny Desk.

The title of the album, the music for which was composed more than a year ago, now seems to be hovering in our new reality like a sweet omen, in which only hope and the joy of living have room.

The lyrics of the songs, assembled in a high-flying melodic architecture, reveal a restless, shrewd and inexhaustible mind, ready at all times to tell stories that make us dream of other possible worlds. The album’s stand-out track is a collaboration with the American singer and songwriter Becca Stevens, on the song titled Carry You. Stevens’ fresh and fine vocals blend in perfect contrast to the deep, captivating texture of Lizana’s vocals.

Perhaps one of the first things I ought to say in reporting on what is only the second concert we have seen, in what Antonio Lizana calls ´a different reality´, is how much I admire the courage of those artists who are stepping out so early in to this new and strange environment. Tonight´s audience in this wonderful theatre were seated in pairs, as only two (free) tickets had been made available to any applicant. There was then six degrees of seat separation in any direction around these pairings. With total sales restricted to only a hundred and twenty the five musicians who took to the stage tonight looked out into a theatre only one third full and on to an audience all wearing masks, and therefore deserve our gratitude.

Staff had done a laudable job in getting us all into the theatre in time despite us having to find passports, show documentation, don our masks and smother ourselves in hand lotion, so the show started right on time at 8.30 pm.

Antonio, saxophone in hand and wearing a casual open necked blue shirt led on Daniel Garcia Diego (piano), Shayan Fathi (percussion), Jesus Caparros Carballeo (guitar) and Mowi De Cadiz (dance, clapping and harmony vocals) to great welcoming applause, as if we were all trying to disguise the downturn in volume that might result from a depleted audience.

The band then gave a wonderful performance and their joy and spontaneity in delivery was in no way diminished. This concert was part of the 24th annual Jazz Mas Canarias Festival which sees several artists follow an itinerary around the islands, In previous, safer, years this band might have been playing on an outside stage near Cic El Almacen, in the dark with a fantastic light show, a cranked up volume and to an audience of maybe six or seven hundred people or more. If the musicians were in any way disappointed by their fortunes, it certainly didn’t show over the following ninety minutes of high energy performance.

They delivered a continuing exploration of jazz-flamenco fusion that has already covered much greater distance and explored more ground, and I think, has taken more risks than anything we have previously seen on the island of this emerging genre.

Regardless of genre, what any great band needs is a ´unique selling point´ that sets them apart from the pack and this Quintet have that in the dancing feet of the flamboyant Mowi de Cadiz who throughout this set brought not only rhythm to the sound but somehow, incredibly, a musicality. There was none of the sexual flavour or challenge often thrown down by flamenco but instead this seemed to be about status as he and Antonio at times were confrontational towards one another and then would fall into perfect comradeship at times when supporting their fellow musicians.

The tracks played tonight were primarily taken off the new album, A Different Reality, and each band member was given a seat in the spotlight.

Daniel, a youngish lad in a flat cap, nonchalantly played a keyboard with one hand and the piano with the other, so creating a really fill section of the orchestra. When he took solo leads with both hands on the piano he created soulful, thoughtful melodies with notes that hung in the air.

Jesus, the guitarist, was there to add rhythm and bass and he did so superbly all evening, but he also took two delicious, major solos.

Shayan, at percussion, had a great skin and rim style and kept excellent time in wildly fluctuating patterns. His most notable trait was in kicking-in and lifting the tempo into a higher gear when required and there were two wonderful moments when a sudden, brief but clearly defined, pregnant pause hung in the air, and in that split second he brought down his sticks simultaneously with the dancer’s first stamp of his his foot and suddenly we were away into a new ferocity, that greatly reminded me of The Rankins, a wonderful Canadian group who used to make music of a genre not unlike this.

Strangely, on the way back to Playa Blanca, our friend ian said from the driving seat that the fusion had reminded him of early Fairport Convention and even of Steeleye Span, both of whom could have influenced the emergence of The Rankins. And the song goes on for ever.

I was delighted, enchanted and confused by Mowi dancer who, despite adding harmony vocals too, still seemed a somewhat peripheral figure to the musical body of the concert. In some ways he very much reminded me of Malcolm Le Maistre who played a very similar role for a while in The Incredible String Band. It gradually dawned on me, though, that each time he danced he added an extra dimension to the performance and made me try to re-contextualise what I was hearing.

His dancing was evocative and at times reminded me of the flamboyant moves of the tapping of Sammy Davis Junior, that was subsequently shaped into the moondance by Michael Jackson.

More than that, though, there was an exquisite move that brought back to me Bill Robinson, the ´shuffle-dancer´ eulogised in song by Jerry Jeff Walker as Mr. Bojangles and brought back to life in dance by Sammy Davis Junior. To be reminded by Mowi of one of my favourite dance narratives of all times was lovely.

Antonio somehow conducted these aforementioned musicians into a cohesive sound that still sounded to have a slice of the improvisational. His instrument glided like a bird on high, sailed like a yacht on the ocean and swooped and at times dived like a gannet after food, and would then rise, Pheonix-like to even greater heights.

He also manages to perform similar feats with his voice, although I felt I detected what I thought were Arabic influences in his keening sounds, or they perhaps were more likely echoes of Portuguese fado sounds. Antonio would also support Mowi’s deceptively simple-sounding hand clapped rhythms that are in fact devilishly difficult to sustain.

That all the pairs all around the theatre stood as one to give a standing ovation and to bring the band back for an encore was not only a sign of our gratitude to them for delivering our first major concert after lockdown but also for their never too tight and never too loose performance that would have been worthy of an encore in any venue before any audience.

Finally as we all filed out, we found ourselves walking past an advertisement for forthcoming events at this venue over the next few weeks that include performances by singer-guitarist Maru Cabrera and by the Tonin Corujo Quartet. Finding information about ticket availability is somewhat more difficult and convoluted these days, and the ticket sales site for tonight´s concert had been particularly difficult and stubborn.

That said when we somehow managed to find a number for them and give them a call the Spanish speaking were pleasant and patient with our English and the sorted things out for us immediately.

The songs tonight had been mainly drawn from the new album, A Different Reality, and to ensure social distancing could be maintained copies were sold after the show through the box office window to a queue encouraged to form outside on the street, whereas usually these sales take place in the foyer. Nevertheless the band came out to meet the fans and to sign purchased copies on not only the compact disc but also the vinyl format full LP size, too.

As he signed my cd copy, (I’d have liked a vinyl but I haven´t got a stylus) I managed to push my business card into Antonio’s hand and introduced myself as a little known journalist from Lanzarote Information, and as man hardly ever read on Sidetracks & Detours blog because of my penchant for rambling the wrong way around roundabouts and taking all the Sidetracks & Detours signposted off any main road.

I pointed out my e mail address on the card and having used the other fingers on that hand to name all my readers, I invited him to just drop me an e mail to arrange a ´virtual´ interview. He is a musician and he is busy and we are not The New Musical Express, so I´m not holding my breath but if he gets in touch you´ll be the first to know.

And if he gets in touch I might also be able to ask him why the few words he wrote above his signature on my brand new cd translate, according to my wife, as ´to Big Grandad.´!??